by Martin ‘Sticky’ Round

I’m going to start this review with a recommendation and an apology then get into the meat of the review. But you don’t need to know any more than “Just get your hands on a copy” Jump to the end of the review to find out where to buy – or –just check here.

Secondly, an apology to Sticky of the delay in writing this, and my Lambrettista blog readers for depriving you of this book – if you haven’t had it on your radar already.

A bit about the Author

So who’s Sticky why should you read his book? Well, for most of his life Martin “Sticky” Round has written about scooters. If you own a Lambretta you probably have his ultimate workshop manual – Stickies “Complete Spanner’s Manual: Lambretta Scooters“ (If you don’t, you should). You may also have read his “Frankensteins Scooters to Dracula’s Castle” – a great read – reviewed here.

As well as that Sticky contributed for many years to Scootering Magazine – pretty much in establishing the writing style and tone of voice. More recently Sticky’s written extensively on ScooterLab. But more importantly Sticky has not only written about the scene is also lived it – and this is why his words truly jumps off of the page of Scooterboys.

Often, when you tell people you ride a classic scooter, they’ll say something like “Oh, you’re a Mod!” or “Where’s your fishtail parka?” and, while the whole Mod thing has greatly influenced my life, it’s not how I describe or defined myself. I’ve never take it as an insult but never felt I quite measured up to the high sartorial standards of the whole Mod thing. I’ve tried, but I’m a naturally scruffy git who occasionally scrubs up well – and, to be honest I was always happier in a flight jacket, a pair of combat trousers over my Levi’s, DM’S or paratrooper boots. A clothing choice that’s much more practical when riding a classic scooter than a tonic suit!

Scooterboys took the snobbery of Mod and inverted it. Sticky takes time to set up the fact that while the great British public could easily identify Mods Punks, Goths and Skinheads (and many others) they are oddly blind when identifying the Scooterboy. As with the rest of this review, I can’t say better than Sticky himself when setting up this book…

“As a truly conscious lifestyle choice existed in small pockets around the country since the 1970s many unaware of each others existence. However the cult only blossomed into a massive national movement in the early ‘80s.

Countless acres of print and endless TV airtime has been givien to documenting all those other tribes yet to the man in the street and the red-top newspapers we were simply Mods.

To this day that ignorance persists. Tens of thousands of people all around the world who identified themselves as Scooterboys, Scootergirls or simply Scooterists have never had much formal recognition. Only cultural mislabelling by Muppets who can’t tell a MA1 flight jacket from a mohair suit

As such, Scooteboys remain the hidden tribe of Britain’s youth culture jungle. We are undiscovered and uncelebrated but pure as a result.

Sticky documents the rise of Scooterboy – from it’s root in (amongst other things Mod) and how it grew apart from it’s forebears – something that often happened to individuals over the space of a single Scooter Run. In Britain – for Scooterboys is unashamedly a British based book – most weekends between March and October there’s a Scooter Rally – with the month’s between hosting a bunch of ‘do’s, part pairs and Custom Shows. Being a Scooterboy (or Scootergirl) involved a) having a classic scooter – and b) attending as many of these events as your life / budget allowed.

One of the biggest issues are having when writing about this book is writing around Stickies words – I simply can’t put it better than he can – so I won’t i’ll quote him! (as sparingly as possible). Don’t worry there are plenty of other great words in this book! Sicky answers the Why Scooters question with the “Are you far are you fucking blind can’t you see is what so great about scooters?” and follows up with “in truth all appreciation of art is personal if you put someone in front of Michelangelo’s David Ferrari 488 Spider or the Rialto Bridge in Venice and all they do is shrug well there’s no hope – they are Philistine is stoning them to death is just waste of good gear!” 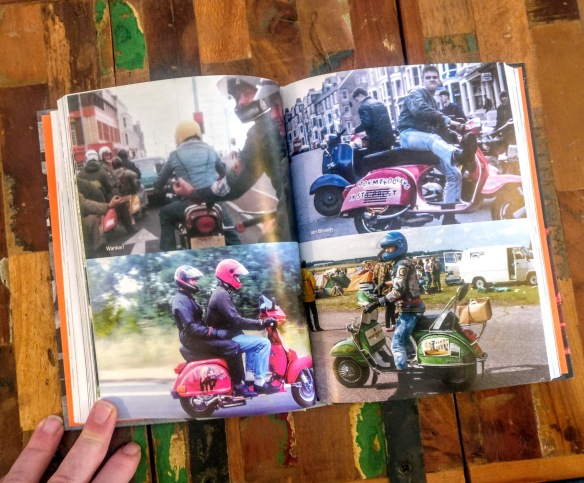 There is a concise history of both the marks that dominated the initial scooter boom and survived until today – the Vespa and Lambretta of course –and is well as the undisputed style of both marques is the fact that ‘back in the day’ you could pick up classic scooters incredibly cheaply – something that sadly isn’t true today.

Scooterboys goes on to document in words and some truly evocative imagery both the scooters, and how they were increasingly personalised and customised with accessories, paint and often hacksaws. To quote Sticky again “customisation wasn’t an option – it was essential if you wanted any sort of credibility. Standard scooters were for commuters”.

Customisation, of course, could run the gamut between the sublime and frankly ridiculous. iI’s all documented here with some wonderful pictures of Lambrettas and Vespas modified with different degrees of success but alter their owner’s requirements – taking inspiration from everywhere from music to culture.

The books also covers the trouble experienced by the lost tribe at the hands of the Old Billl, Non-scooterist and even between clubs or factions within the scene. At the time this was all part of the fun… and resulted in some great “war stories”.

All this and much more is documented in this fantastic book. If you’re not much of a reader, Sticky’s fantastic turn of phrase may convert you – but if they don’t, it’s worth buying for the pictures alone. The book has been beautifully put together, and the design reflects the subject matter. My crappy pics don’t really do it justice. I also firmly believe it’s a culturally important book – documenting a ‘lost’ British subculture that hasn’t had much mainstream attention. Sociologists take note!

If you haven’t already will copy why not treat yourself – or someone who would appreciate it. There is still just about time to get one delivered before Christmas!

Get it on Amazon Here. 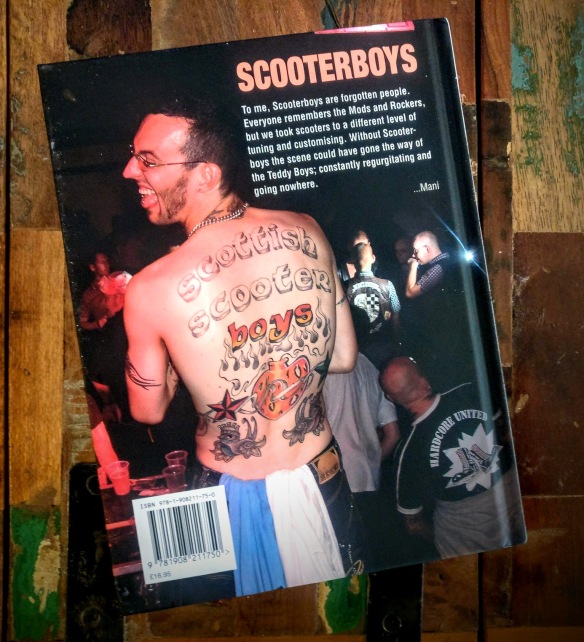 2 thoughts on “Scooterboys – The Lost Review!”