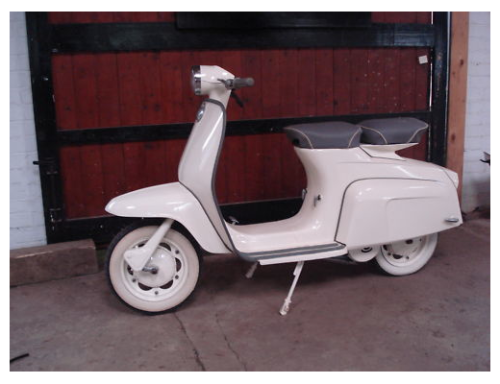 I posted before about the Lambretta J-range being a possible affordable route in to Lambretta ownership… but since then I’ve seen some magnificent examples, like this one I posted previously.
Here’s another rather nice one up for sale on eBay now. The asking price seems a bit steep at £2,940…
Read the description, and make your own mind up.
The example offered has formed part of a private collection and features the separate saddles employed by the early production examples, later versions being fitted with a dualseat. It is rated as being in good mechanical and electrical condition by the vendor and has benefited from some minor cosmetic restoration to the ivory paintwork but is reportedly otherwise original, the whole being very nicely presented. Described as running beautifully it is offered with a Swansea V5C and would form an interesting addition to any scooter collection. Running on continental white walls.
Well, I suppose it’s still £300 cheaper than the new LN. I do like the combination of white wheels and whitewall tyres… it gives the illusion that it’s running on bigger wheels with low profiles!