I missed any news of this movie on it’s original release in 2018. It’s available on Sky on demand, so if you’ve got that, give it a spin and let me know if you think it’s any good! 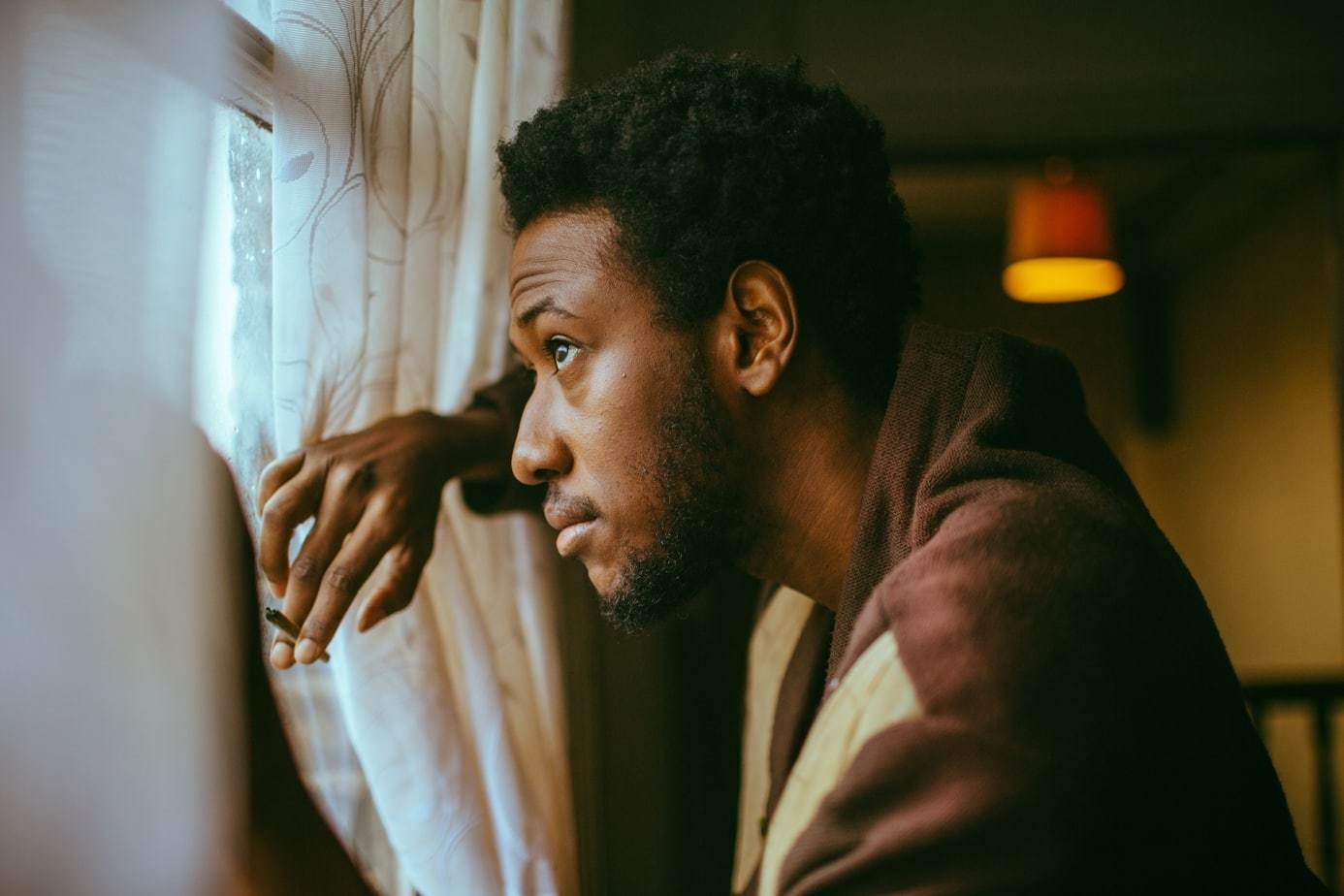 RUDEBOY is a film about the origins and ongoing love affair between Jamaican and British Youth culture. A film that explores the power of music to break down cultural barriers and change lives and the eventual birth of a modern multicultural society – all told through the prism of one the most iconic record labels in history, TROJAN RECORDS. Combining archive footage, freshly shot interviews and drama – RUDEBOY tells the story of Trojan Records by placing it at the heart of a cultural revolution that unfolded in the council estates and shanty towns of the late 60’s and 70’s. The film begins in the 1950’s, as Jamaica is slowly transitioning to its eventual independence in 1962. We meet Duke Reid and his legendary Trojan sound system and explore the social and cultural conditions that give rise to the birth of the rude boy, the emergence of sound-system culture and the rise of the distinctive Jamaican sound ska. In Act 2 we land in Britain in the 60’s and look at the Jamaican immigrants’ experience through the eyes of a young Dandy Livingstone. We meet first generation Windrush immigrant Lee Gopthal and witness the birth of Trojan Records while Enoch Powell is giving his Rivers Of Blood speech. There is a growing market for imported ska and new rock steady sounds that Trojan records tap into. Act 3 tells a story of how working-class youth discover the sounds of ska and rock steady and the most the important subculture in modern British history is born, the Trojan Skinhead. A new sound Reggae emerges. Black and white unite on dancefloors as we build up to the landmark for underground skinhead culture and the ‘Spirit of 69’. From 1969 – 1973 Trojan becomes the most important Jamaican label in the world and is at the peak of its powers. The Tighten Up compilation series, spreads the Trojan word to the masses. The label begins releasing almost everything that is sent in as the volume of output becomes incredible. A new gold rush ensues with producers rushing over from Jamaica selling records to Trojan Desmond Dekker emerges as the first star of the underground scene. ‘Double Barrel’ by Dave and Ansel Collins give Trojan their first number 1 hit single. Ken Boothe inspires the lovers rock sound with Trojans second number 1 ‘Everything I Own’. Pop Reggae is born and Black identity and pride builds around these records as a new confident identity is cemented. But the good times can’t last forever as in 1975 the label over extends itself and folds. But the impact of Trojan records lives on, through the 70’s right up to the present day. Jamaican youth culture has flourished and is everywhere you look – it spawned 2Tone, the Notting Hill Carnival, Sound systems, the seeds of the Hip Hop revolution, club culture. The cultural impact of Trojan records has shaped the world we live in.

If that sparks your interest, you can grab the soundtrack on Amazon, here.

A proper “Skelly” out of Thailand, from the YouTube channel of Motosyndrome Area 755. I don’t know much about the shop, but from this video it looks like they know their Lambrettas, and do quality custom work.

While not to everbody’s taste – when a skelly is done properly, they are a thing of rare beauty, and a real head-turner. With the custom headlight an chopper bars, chopped legshields, sidewinder seat to the twin megaphone exhausts, plus lots of other little touches – this one ticks all the boxes for me. Good job. 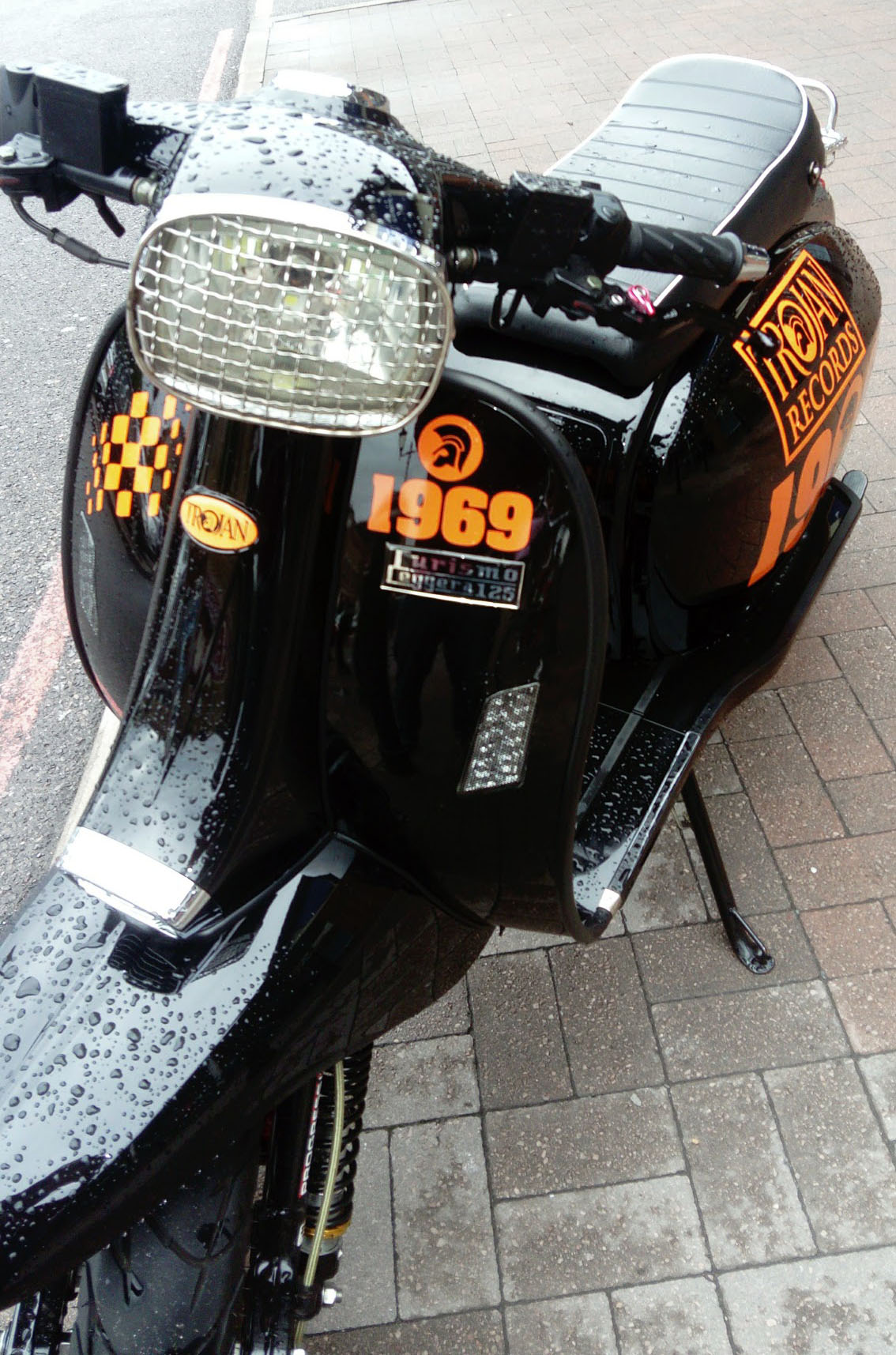 Came across this tidy Scomadi in Staines, sorry Staines-upon-Thames, the other day.

It’s been tastefully modded to lower the back end, which gives it a much more traditional look, along with a number of performance upgrades. I had a brief chat with the owner, Mark, and it’s up for sale… he wants £2k for it (he’s spent over £3k on it). If you’re interested, drop him an email.

This is a Lambretta blog, not a music one. But I’m going to take a moment to acknowledge the sad passing of musical legend Prince Buster.

37 years ago (!), almost to the day, my life changed. That’s the day Madness performed their first single “The Prince” on Top of The Pops. The song (as was the band’s name) was tribute to someone I’d never heard of… Prince Buster. I knew that this was the group I’s been waiting for. Only a couple of years older than me, but with such a cool, fun, nutty vibe about them… the clothes! The music! Down to Woolies the next day, clutching my 75p, The Prince became my fourth record in my collection. (The others were The Sex Pistols “Silly Thing”, Allies Tartan Army by Andy Cameron, and The Birdy Song  – a gift form my Granny – honestly). The B Side of The Prince was just as good – if not better – a song called Madness – a Prince Buster cover. With The Specials in the charts with a cover of Al Capone, (retitled Gangsters of course) and Madness to soon release One Step Beyond, the influence ‘The Prince’ is undeniable. I was lucky enough to see Prince Buster live on several occasions… including with Madness at Finsbury Park.

I, like a lot of my generation, began to seek out the originals. Prince Buster was a revelation. Songs like One Step Beyond, Al Capone, Rough Rider, Wreck a Pum Pum and Big 5 are classics. The whole ska / mod / skinhead scene was inexorably linked to the world of scooters… so maybe, without Prince Buster – no Madness – no love of scooters – no Lambrettista Blog…

I’ve often featured the work of talented photographers on the blog, and Dammo is the latest of the bunch. Dammo specialises in capturing British subcultures with their inherent diversity, quirkiness and definitive style. The majority of his work reflects his own personal interests in music and cultural movements: be it Northern Soul, Mod, Rockabilly, 50s R&B or the Scooter Scene. However, individual commissions will be considered. 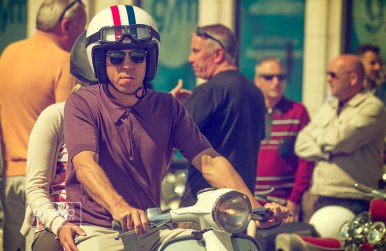 Dammo’s photography is stylish, crisp and detailed, in terms of tone and colour, offering a document of time and place. There is a vintage flavour to his work, but with a fresh modern perspective, demonstrating a graphic designers eye, combined with a photographers passion for the subject and the art of making the observer feel present in the event. He offers bespoke quality pictures depicting events and people in a way that illustrates the emotion and intrinsic timeless nature of British sub cultural movements, whether it be for editorial purposes, display or web. 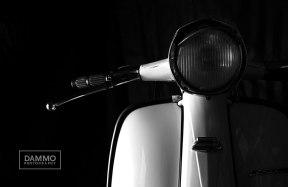 For photographic enquiries you can call Dammo on: 0777 219 7276 or email him here. Alteratively, follow him on Facebook or Twitter to keep up to date with his latest work.

All images featured in this post are used with permission and are copyright ©Dammo Photography 2014. All rights reserved. 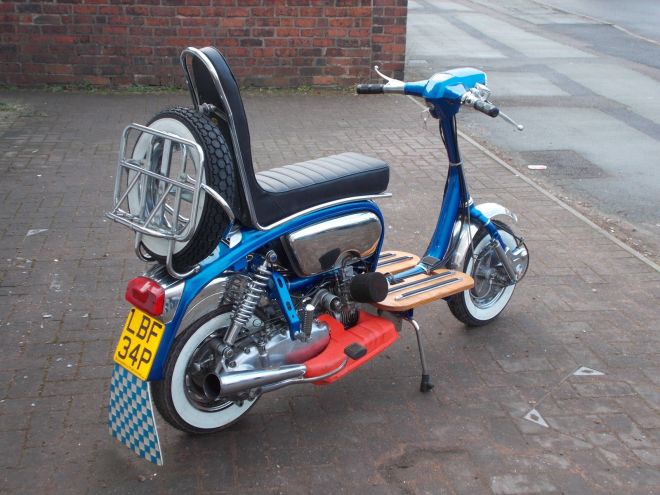 Back in the day, the easiest way to “customise” your Lammie, was to take the side panels off, and unbolt anything you could… to create a “skelly”. This, along with bolting on a big bore exhaust was also done in pursuit of an elusive extra couple of miles per hour…

As with all these things, there are different levels of “getting it right” and this skinhead style skelly has plenty of authentic 70’s style touches… the megaphone exhaust, sidewinder seat and wooden running boards all giving it a the proper skin/suedehead feel.

The TS1 225 lump should give it plenty of poke, with a hydraulic front break to bring it to a safe stop. 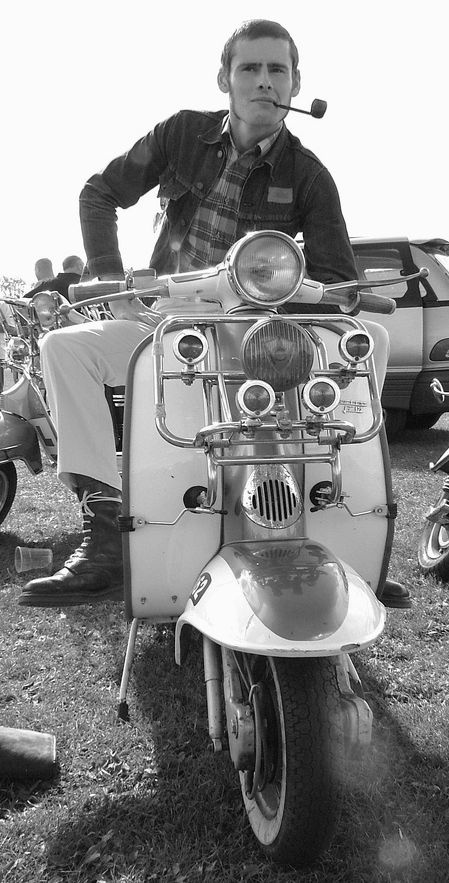 Clobber? Check. Scooter? Check. Pipe?  Maybe lose the pipe. Though sucking a thoughtful pipe immediately makes you look more intelligent. Ok. Keep the pipe. Maybe I should get one…

If anybody know who this is, or who took the shot I will happily credit them. 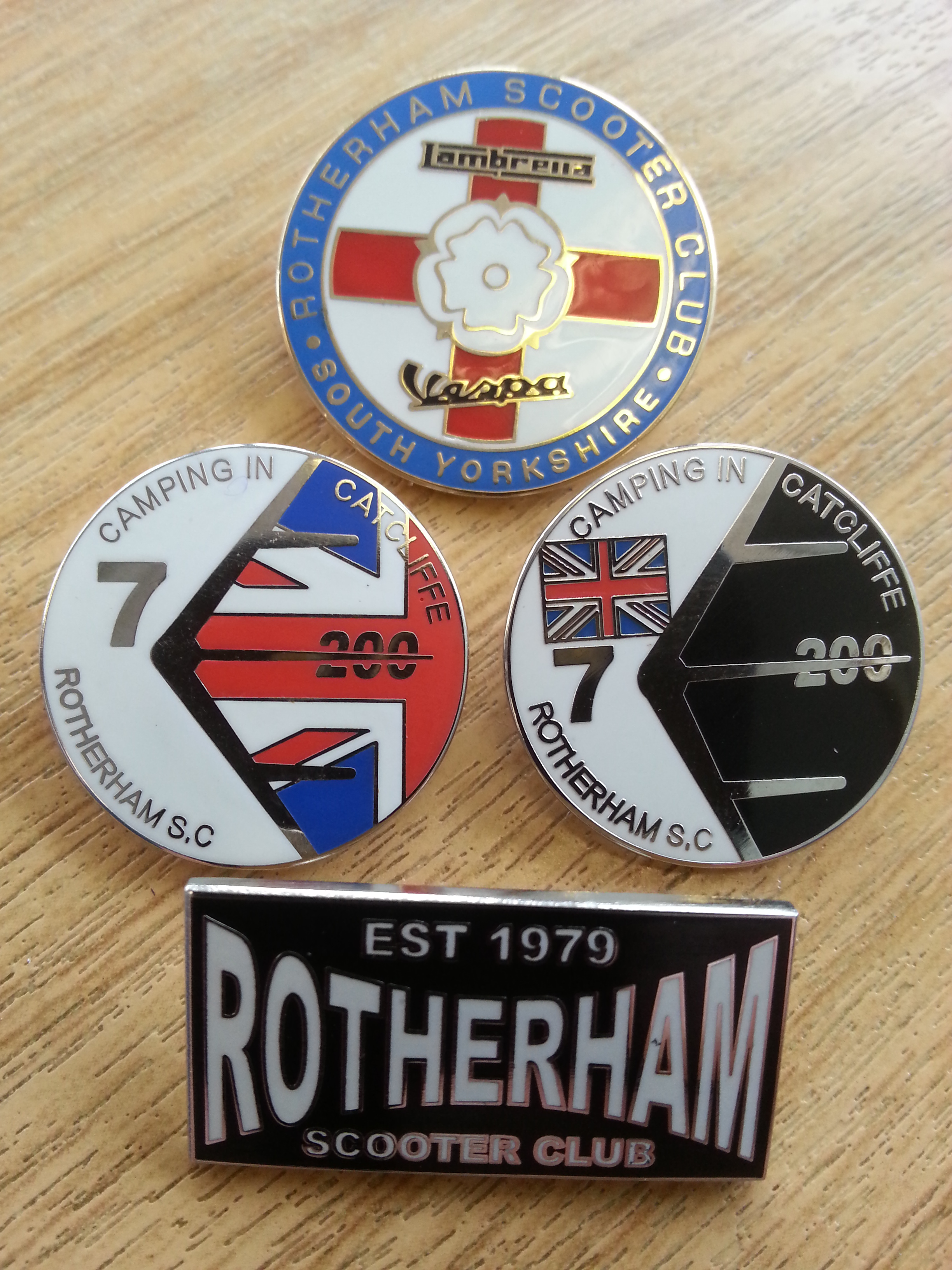 Lambrettista is back after a short break (at the seaside with the family in sunny Broadstairs, Kent… highly recommended!) Now I’m back, I’m kicking off with a blog recommendation… check out the “You Don’t Need Speed” blog here… Scooters, music, style and more from Lambretta riding Pete, based in The Steel CIty… Sheffield. As well as putting together a very enjoyable blog, Pete can sort you out with enamel badges for you club or event… and has a nice stock of Punk, Ska and Mod button badges in stock here too. As well as the more commonly seen Trojan ones, I love the ones from the more esoteric ska record labels… Bigshot, Doctor Bird and Treasure Isle… bang on.

I find it amazing how countries around the world have adopted the scooter scene ethic… often with the same music and fashions as those originally found in the UK. I know the scooters are Italian, and the music is Jamaican, but the culture is pure British. Except it’s not. It’s GLOBAL. As this video from Bogota (that’s in Colombia, South America for all you geography dunderheeds). And I think it’s pure brilliant.

BTW, As well as Colombia, this blog has readers in Venezuela, Brazil, Peru, Chile, Uruguay and Argentina. Most of South America in fact. So if you own, ride, or are just interested in Lambrettas and you live in Guyana, Surinam, French Guiana, Bolivia or Paraguay… please get in touch, send some pics, let me know what’s happening in your neck of the woods. There are a few places around the world untouched by the “Lambretta virus” but, as I’m finding out… not many!