Love the original factory paint with period stickers on this ’59 Framebreather.
It comes with a TS1 225 engine, and some minor jobs to get it finished, but to my eye it’s a cracking looking scoot.
The original engine comes as part of the deal, so if you want to take it back to standard, you can.
On eBay here

So, now the sun is finally suing, it’s time to sort through your wardrobe for something suitable to wear to the shops. Or the beach. Or work, if you work somewhere a bit casual. Why wear some generic t-shirt from a high street shop, when you could be sporting a fine garment showing your love of the world’s finest motor scooter> All shirts designed in-house by the Lambrettista Blog Design Team. That’ll be me then. Oh, if you’re a Vespa fan, it’s all meant in good fun. Honest.

Wasp Killer Tee T-shirt by Lambrettista
More Lambretta T-Shirts
More designs are going to be added as and when I get round to it. Check out the full online shop
The Lambrettista Blog Shop

Some designs will disappear if I get bored of them, and new ones will pop up, as and when. If you’ve got an idea for something Lambretta related you’ve like to see on a tee… drop me a line, I’m always open for a bit of inspiration. Nothing too rude, this is a family bog 🙂

SPECIAL SUMMER OFFER! 20% OFF!
There’s 20% off all the T-shirts if you enter the voucher code voucher code SUMMERSPIRIT is applied at checkout. Be quick, offer is only valid until 30 June, 2014 at 11:59PM.

You might remember the homemade scooter caravan I posted about last year; if not you can read the original post here. Well, it’s up for grabs on eBay. You really could do the next scooter rally in comfort and style!

It’s got a “Buy It Now” price of £2,700, which seems exceptional value for money when you think of all the hours and effort that went in to build it. Here's the ebay link.

Like Loading...
I’ve just discover this bunch of fellows and chapesses … an association of scooterists who “appreciate the ambience of a more genteel period in time”. They’ve got a rally coming up too… and awfully pleasant weekend near the River Severn. The poster is a lovely piece of retro design work. 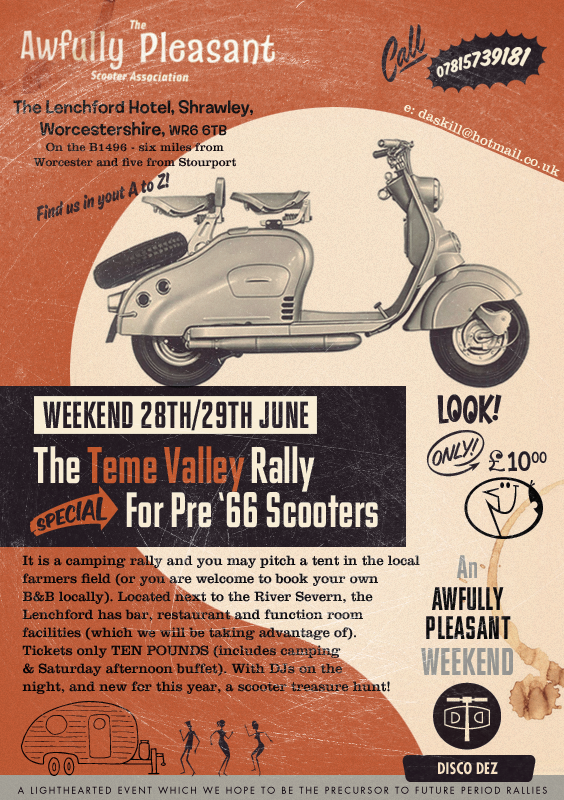 If I said the name Horace Panter you would probably think of The Specials, at least if you have a decent taste in music and you’re of a certain age! As Sir Horace Gentleman, he was (and still is) the bassist for one of the most iconic bands of the ’80s, spearheading the 2-Tone movement. What you may not know is that Horace and Jerry Dammers met at Art School… where they were both studying  Fine Art.

Today, Horace is very much a painter as well as a musician. He paints in a very Pop Art style… following the mantra of ‘elevating the mundane’, taking a fresh look at the familiar, encouraging the viewer to see ‘everyday’ objects/people with new eyes. I can see influences of British Pop Art’s leading figures, Peter Blake, and also of one of his pupils… Ian Dury (also an accomplished artist) in his work.

Horace’s paintings are often inspired by random events and people. One such painting, ‘The Scooterist’ resulted from a chance meeting with a posse of scooterists outside Coventry’s Transport Museum.

Horace was asked by local filmmaker, Richard Wood, to participate in promoting a charity event to raise funds for Clare House Hospice in Liverpool. This involved the car, HERBIE (from the eponymous film) being driven from Liverpool to Monte Carlo and Horace joined Lady Godiva (Pru Poretta) on its journey from The Ricoh Arena to the Transport Museum. This short journey was accompanied by a whole raft of vintage VW’s and an honour guard of local scooterists.

It is generally true that scooterists are fans of The Specials so while they were all busy snapping photographs of Horace, he decided to reciprocate and turned his camera on them. Sifting through his photographs later, he turned his attention to the remarkable detail on the scooters and decided to paint one with its rider on board in his typical icongraphic style. He says: ‘There were some amazing scooters … really detailed. All that stuff about pride in appearance, everything just right in terms of both scooter and scooterist, I love it.’

Horace didn’t know who the rider was so he put out a call on Facebook and Twitter to ask if anyone could identify the mystery scooterist. Within minutes, responses started to come in and they weren’t all the same! However, half a dozen people pointed to Carl Barlow from the Low Numbers Scooter Club in Leamington Spa.  It was definitely him, as other photos testified. Horace then contacted Carl by sending him a message on Facebook but by then Carl had had dozens of texts and emails from his friends to tell him that Horace had painted his portrait. Happily, mystery solved. Carl says ‘Over the moon that Horace has chosen to do the pic of me; it’s a real honour! I’m thrilled that he will be letting me have a print. It’s a wonderful painting … not just because I’m in it!’ I’m with Carl on that. There is a real ‘iconic’ feel to the work.

The original painting has been sold. There is a limited edition of 35 prints (40 x 23 cm) available from the galleries listed on Horace’s website: HoracePanterArt, where you can check out his other work, including his series of ‘Cassette’ paintings. You can also check out his Facebook page, and follow him on Twitter.

A big thank you to Clare in helping me put this post together.

The film title says Hong Kong Teddy Boys… but they’re not quite Teds as I remember them. Seriously cool scooters, whatever they are… can anybody Id them (the scooters, not the actors!)? 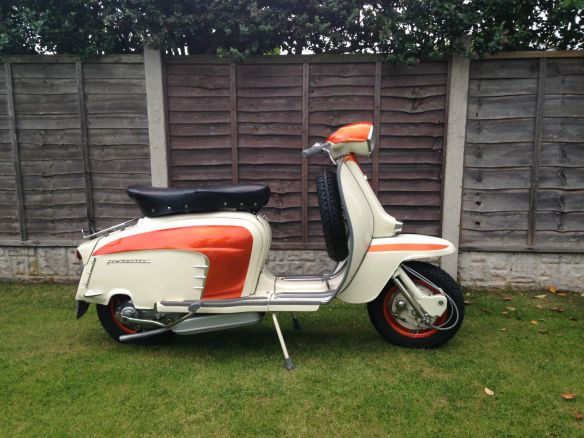 Sometimes, Less is more. In complete contrast to the Real McKoi, a “full on custom” if ever the was one… here’s a simple, straight TV, with nice paint, but nothing too flashy, and it’s just gorgeous. 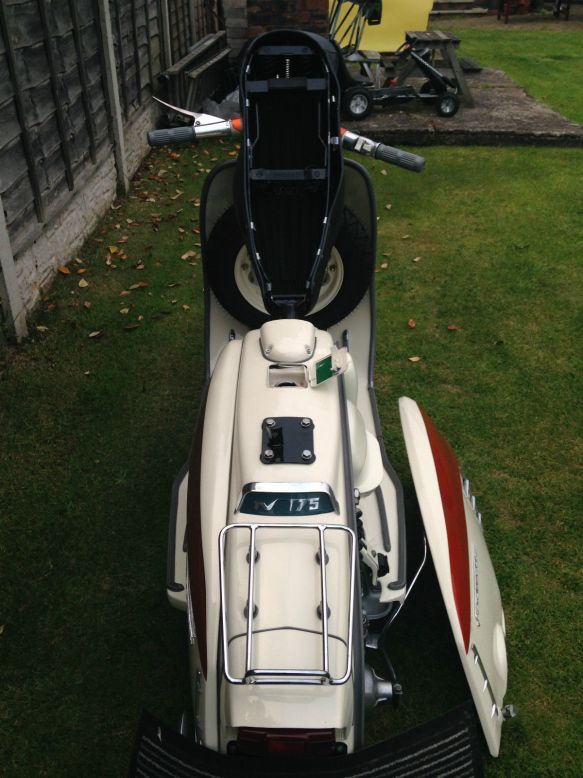 But then a again… you wouldn’t… but if you were stuck at the side of the road with a hole in your piston and had to get home, and there’s a handy dumpster nearby…

Remember Rod’s Aussie barn find…  the controversial F with the D type forks? Well. there’s been a bit of progress… Rod has found an old dealer and bought their entire stock of model F parts… so he has most of what he needs for his restoration. 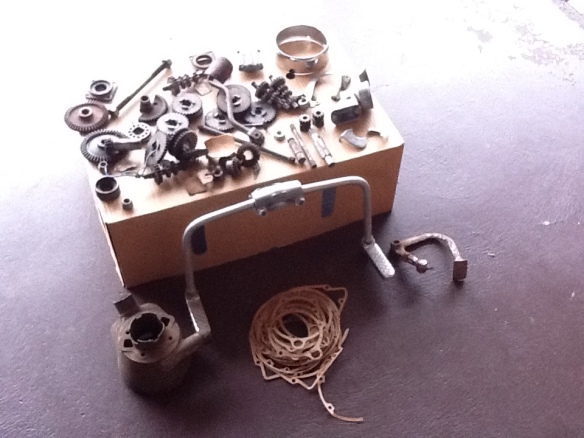 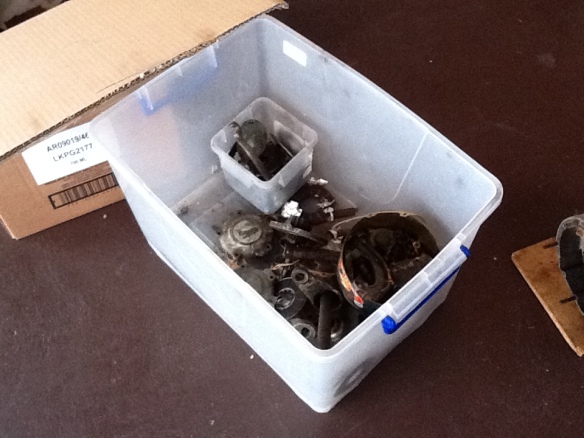 He’s also started to strip the scooter down with the help of the grandson Harry… who has been designated his chief mechanic. He’s become the envy of his classmates, helping his grandad restore a vintage Lammie. 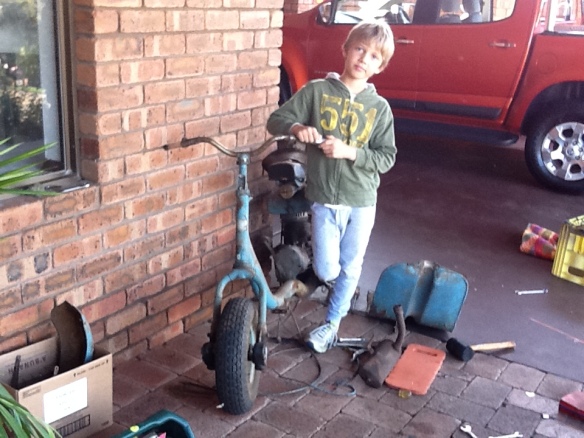 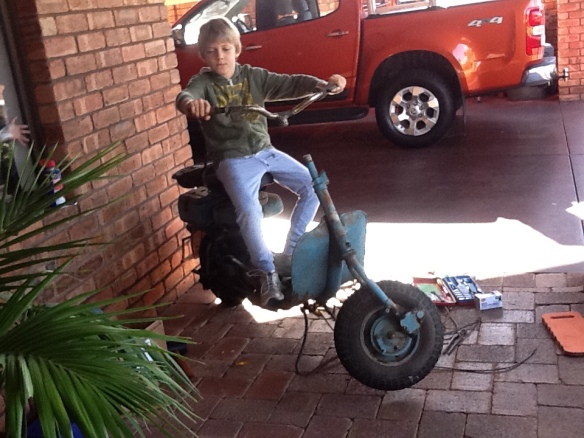 His brother Hugo loves the Lambretta too… this means Rods F will have a great home and remained loved for the next 70 to 80 years… theirs a legacy to be proud of!