So – I’m probably going to get in trouble for this – but hey-ho… I’ve got a trusted “source” at Lambretta, and they’ve shared this image of the new forthcoming Lambretta model – tentatively called the “G-Special” for now – that will be in full production early next year.
Pictured is the the final prototype frame for the G350 concept previously shown at EICMA 2019 as G325. It’s a solid steel “full-monocoque” frame/chassis – with – in the classic Lambretta tradition – fully removable steel side panels – (side panels not shown in this pic). Now, I know certain Lambrettisti that may criticize the monocoque approach – but its an approach Lambretta have used in previously – so there’s nothing inherently ‘non-Lambretta’ about a monocoque! The current V-Special has a semi-monocoque frame.

Clearly, a lot of thought and effort has gone into designing a ‘best of class’ modern scooter that still has Lambretta DNA. Lambretta are being very close-lipped about engine sizes – and after showing the G325 model at EICMA; 325cc was the expected capacity – but my source tells me the model is referred to internally as the “G350” – so I’m sure you can draw your own conclusions! A 350 from Lambretta would be a real beast – and bring Lambretta right back into dominance in the “Classic Modern Scooter” category… and who doesn’t want to see Lambretta back on top where they belong! It’s not all about speed and power though – there are also plans for a fully high-powered electric version of the G-Special in the pipeline.

Interesting times, and good to see that the Lambretta brand is still innovating well into the the 2020’s – with ambitious plans to take their scooters to the next level!

I’m sure many of you will have heard of the tragic passing, in truly shocking circumstances, of Lambretta enthusiast Tik Tester. Tik leaves behind a young family. A Go Fund Me page has been set up to help them out at this awful time. All funds will go directly to them.

I got down to the Retrospective Scooters open day at their workshop/showroom in Walthamstow – London E17. The event was well attended with some nice Vespas, Lambrettas and even a Heinkel Trojan in attendance. 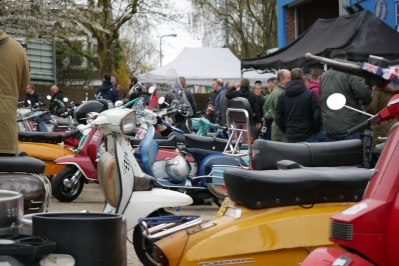 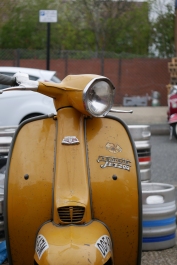 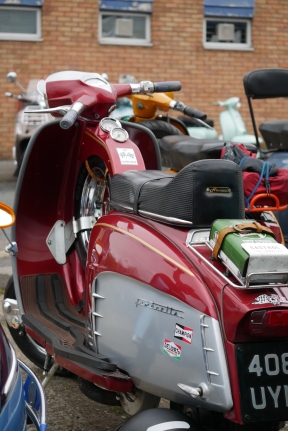 The theme of the day was ‘beating the (forthcoming) Ultra Low Emission Zone’ and there were lots of Electric scooters on display, both from the world leader in electric scooters, NUI, and with a couple of classic demonstrators – a Vespa and a Lambretta, both converted by Retrospective to run clean and green on electricity.

Both machines look very assured, and ‘sit’ like the classic scooters they are. Retrospective had a range of Royal Alloy scooters in attendance too… a modern auto clearly modelled on the classic GP (by way of the Scomadi of course), but The Electric GP next to them looked just like any other classic Lammy. 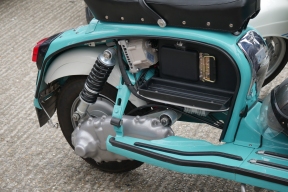 So what does an electric Lambretta ride like? Full disclosure, I didn’t ride one myself, but I spoke to a couple of people who did. The overall impression of everybody I spoke to was overwhelmingly positive. Everyone that rode one dismounted with a massive smile on their face. I was told that power comes on extremely smoothly, acceleration is fantastic and the whole ride feels very ‘natural’. From a bystanders point of view, it’s bizarre to see a Lambretta startup, move off, and accelerate away all without any noise, smoke or smell. Some might think these are key elements of the whole Lambretta experience – but I’ve seen the future, and it doesn’t smell of 2stroke! There is something really weird about a Lambretta zooming past you in almost complete silence – all you can hear is the noise of the tyres on the road. One issue that as a rider you’ll have to be even more aware than ever of pedestrians stepping out in front of you – as they won’t hear you coming! Retrospective are investigating including a noise generator as part of the conversion.

There is going to be a huge majority of Lambretta owners who will always prefer the traditional 2-stroke powered internal combustion engine of the classic Lambretta. And while the ‘nostalgic side of me sympathises, and agrees, I can see the way the world is changing. There are more and more places where we won’t be allowed to ride a traditionally powered scooter. Or, if we are, we’re going to have to pay handsomely for the privilege. An electric conversion for your Lambretta (or Vespa) isn’t exactly a cheap option, but I for one have started saving up!

So, I’m going to try and keep this running as a regular feature. Here’s a couple of things to keep you occupied this Saturday and Sunday… 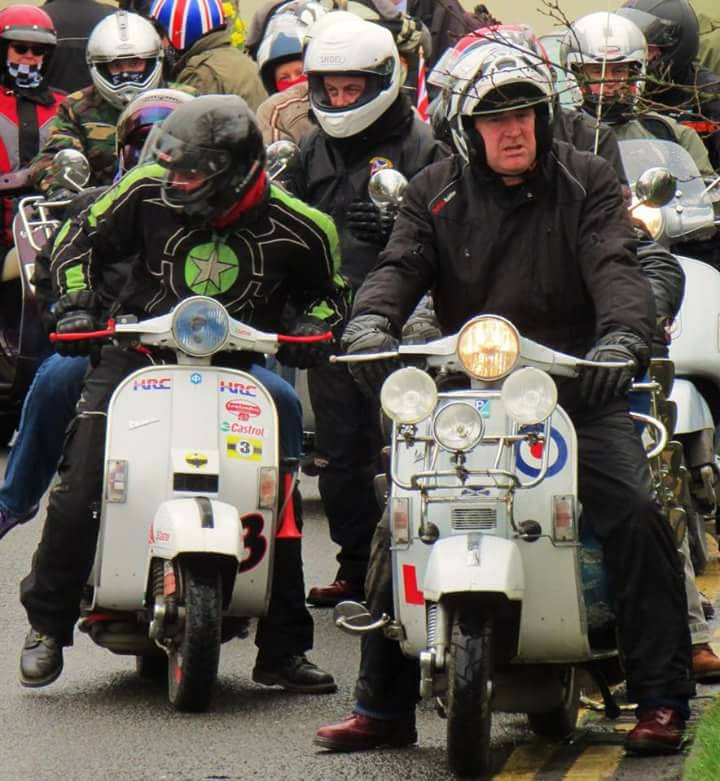 I did a big post about this yesterday, so I won’t repeat myself – here’s the link, or just scroll back 🙂 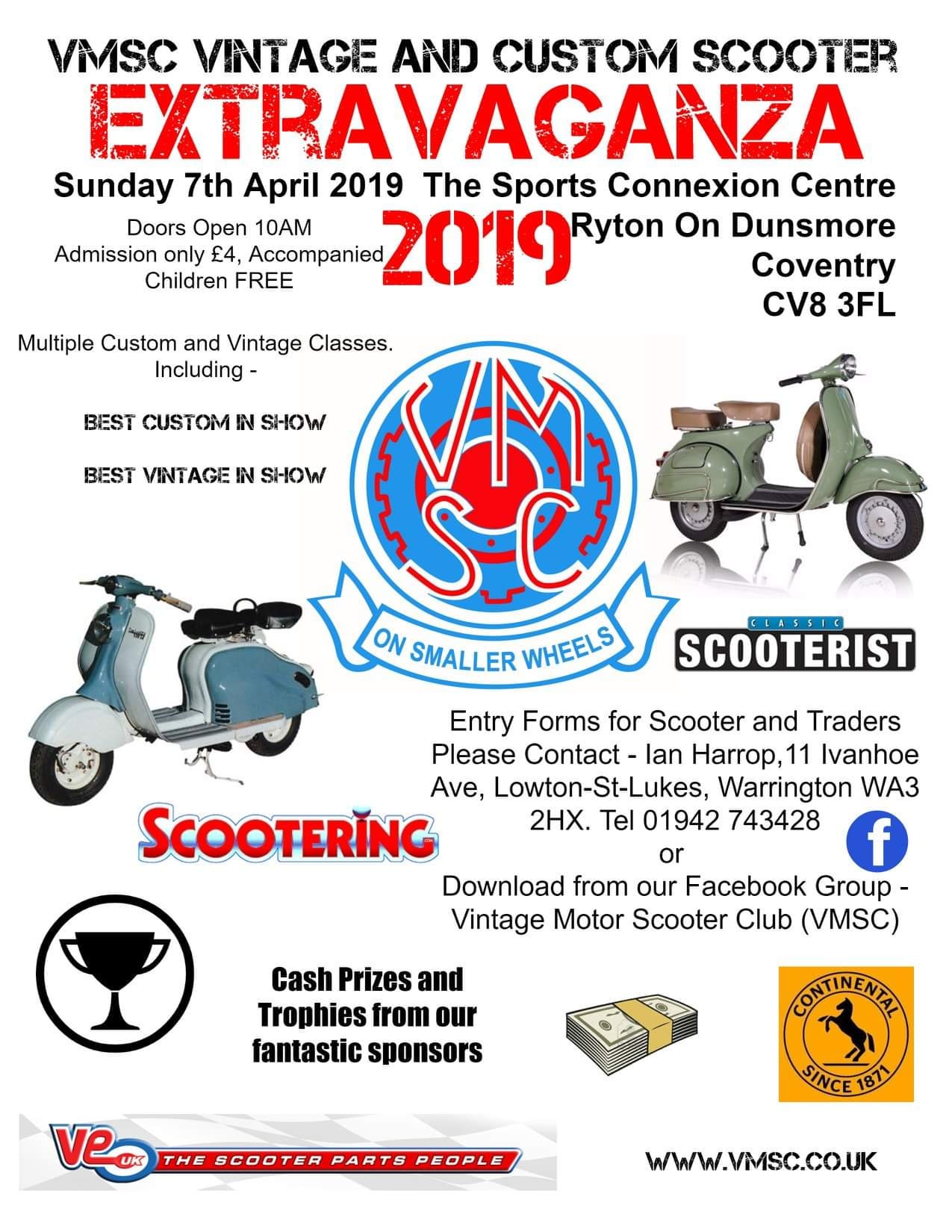 If you’re planning further ahead, check out the EVENTS page for a more comprehensive list.

And they just kept coming… What a turn out!

It was a misty start to the day, but the sun soon started to shine for the hundreds of scooters that met at the Staffordshire Regiment Museum in Whittington to ride on mass to the National Memorial Arboretum, Tamworth. The Army of scooters, led by Paul Marshall (WSA Chairman) took a scenic route marshalled with precision to the NMA, and what a tremendous sight to behold. It is estimated that around 900 scooters attended, more than double of last year. Many, proudly displaying their ride of respect leg shields, flags etc.

The ceremony at the wall was very moving, led by David Whittall from the British Christian Scooterists Association and Andi Poole from AONSC and WSA. The sound of the last post played by Antonio Socci bounced off the walls giving people time to reflect on those who have lost their lives in past and present conflicts. Wreaths were then laid by various scooter clubs in deafening silence.

Monies raised from the sale of patches, leg shields and collection buckets will be given to the National Memorial Arboretum, The Staffordshire Regiment Museum and Galanos House.

Paul Marshall, who is the chairman of The Warwickshire Scooter Alliance would like to say a massive thank you to the NMA, The Staffordshire Regiment Museum, the WSA committee, the marshalls… you know who you are, and of course everyone that attended and made it such a huge success.

Thanks to Lynda from the Warwickshire Scooter Alliance for sending me the above article.

You can find out more on the The Warwickshire Alliance website. www.twsa.co.uk

In another first for the Lambrettista Blog – here’s the first – leaked* videos of the New ELECTRIC Lambretta Vendetta!

It seems that Lambretta have teamed up with electric scooter pioneers (and Red Dot Design Award winners) NIU – There’s not a lot of data to share at the moment – although it’s rumoured that Token Hu – Vice president of NIU (and formerly of Frog Design and Microsoft) is heading up the project personally. I expect that as much as an electric powertrain they will be bringing their innovative Smart technology to the project.

I’ve posted a few times about electric vehicles (EV) on the blog before – and firmly believe they are the future of transportation – on two wheels or more. So, what you see here is truly the next generation of Lambretta – a brand that is going to be as relevant and innovative in the 21st century as the 20th. Exciting times!

This is the next step in  the evolution of the Lambretta. Remember where you saw it first! Stay tuned, and I’ll share more information when I can.

*Feel free to share – but please don’t ask where I got these videos – I have to protect my sources!

Ali, of the Midhurst Detours SC, wrote to me (a while back I must admit) with details of her new website “Diary of a Detour“. She’s been going on the rallies since the early 80s and will be including rally write-ups and other scooter tips and photos – add it to your reading list!

Nope, not the Donald… Peter Lundgren, President of the Lambretta Club USA. He was letting me know that they’ve re-vamped the website, adding a ton of new content.

At the moment, only a fraction of they’ve scanned is up on the site, but  what is there is gold dust for Lambretta owners. Their primary focus is on machines not covered within Stickies manual, so if you have an early machine, it’s well worth checking out.

I’m happy to say I’ve got Lambrettisti from all around the globe reading, and getting in touch with the blog – This is only a hobby for me, so it really makes my day when you do. The love for the Lambretta is truly worldwide, and unites us all.

It goes without saying, if you’re in the US, joining the LCUSA is a no-brainer!

And their FB page: https://www.facebook.com/LambrettaClubUSA/

Some pics of the New Lambretta Vendetta at EICMA (the annual trade show for motorcycles in Milan). 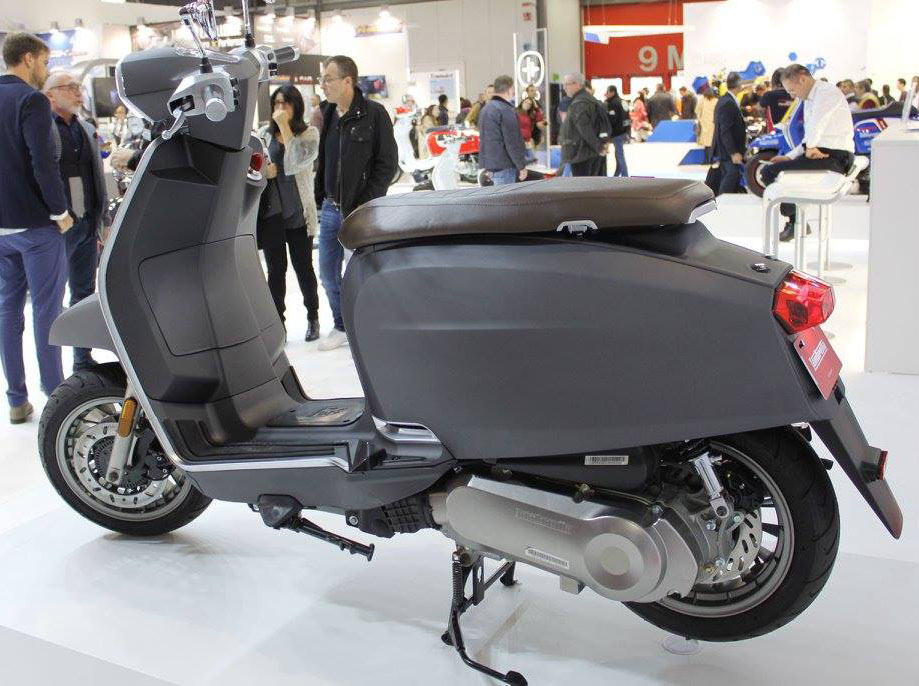 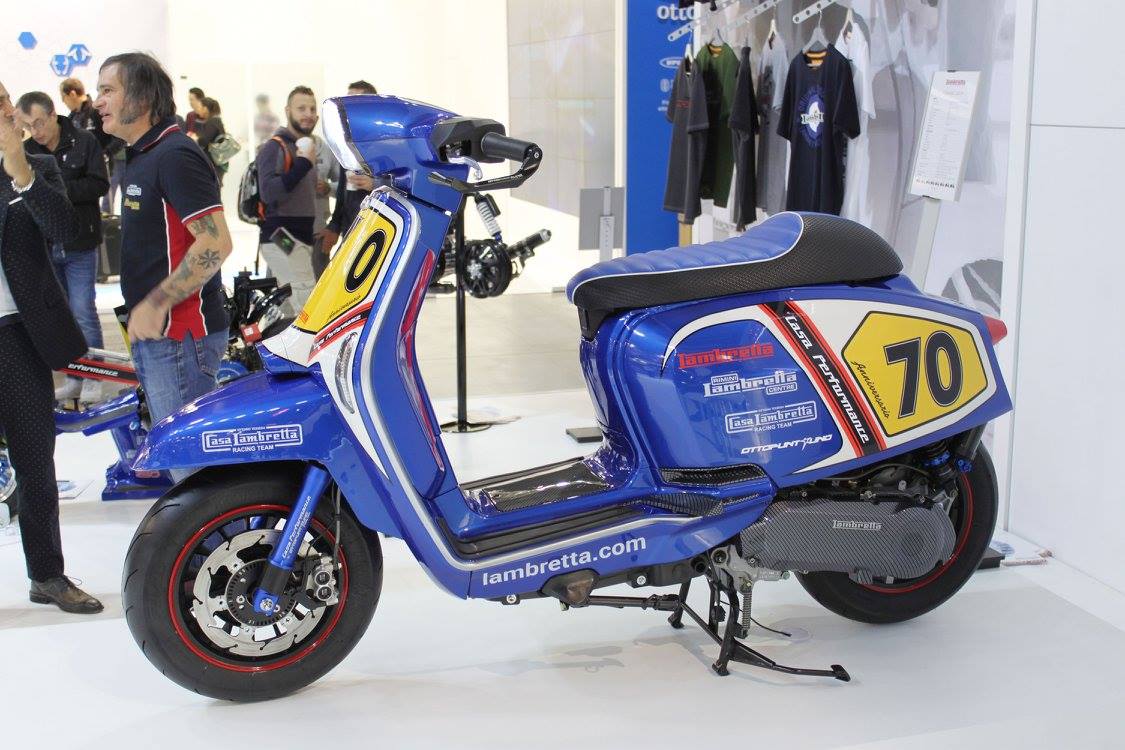 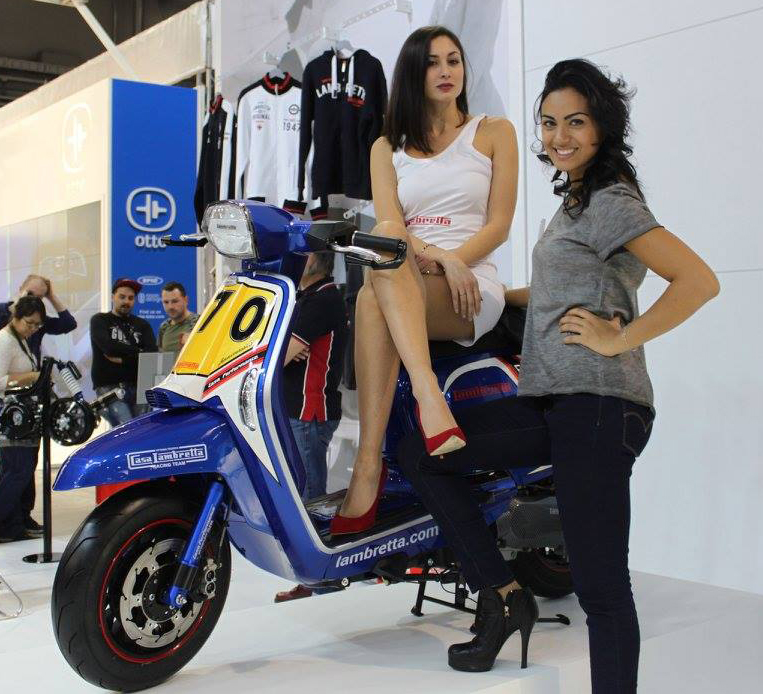 LIDS
New official Lambretta helmets… colour matched to the new models. I suspect these will go down well, even with hardcore traditionalists 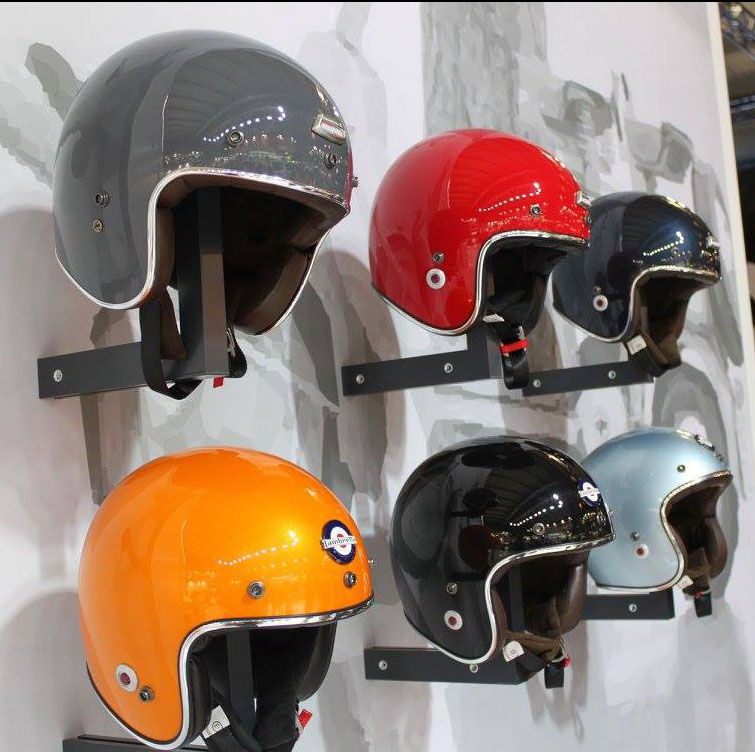 Like their forebears, there are now some official accessories, racks, screens and more. 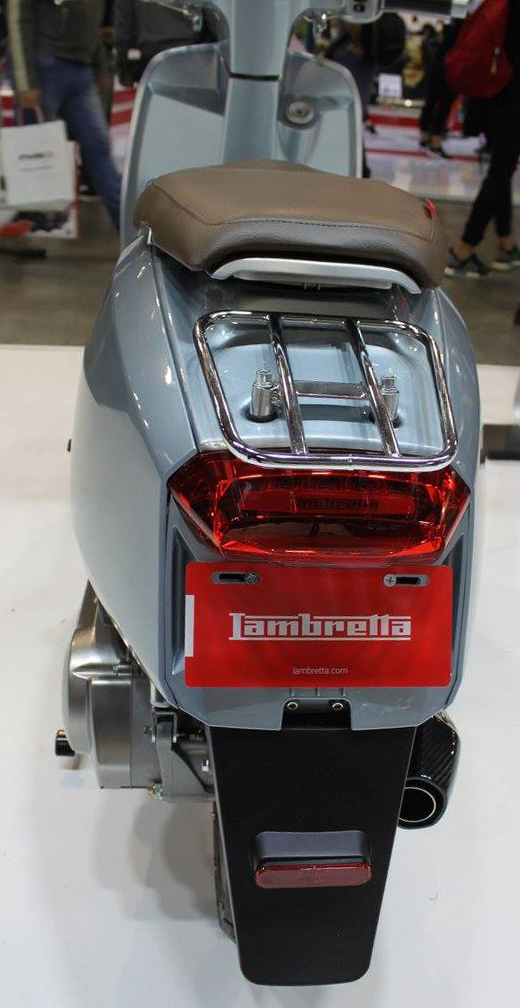 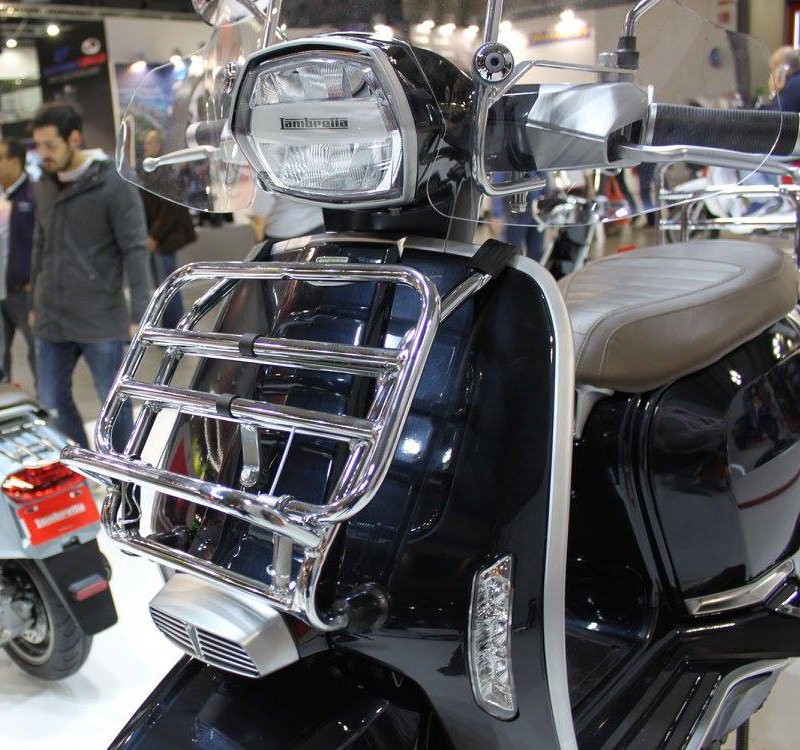 That’s it for now. I think the quality of ‘fit and finish’ on project Vendetta is becoming plain to see. More pics, with details of how you can get hold of one, and how much it’s going to cost you, coming soon.

A couple of things I’ve picked up on the new Lambretta Vendetta… here’s a close up of the LCD headlight display unit. Interesting to see the the Bluetooth icon, showing Bluetooth connectivity. There’s an App that comes with your new Lambretta too, apparently.

See the official specs below,

Lights; LED lights feature all round, including the indicators.

Flex front mudguard; As with classic Lambrettas (since the LD and LC anyway) the Vendetta features a fixed front fender (or mudguard as we tend to call it in the UK). Except when it doesn’t. There is a ‘flex’ model on all capacities, with a turning front mudguard. For those who prefer a more ‘Spanish’ look I suppose :). One oddity is that the flex models are available in different colours to the standard ‘Specials’.

Storage; There’s a large luggage area under the seat, a luggage hog in front of the seat, and a glove box integrated into the legshields. I have also seen images showing traditional ‘sprint rack’ like rear carriers.

Metal, NOT Plastic. The chassis is STEEL bodywork, on a tubular frame. The side-panels are double-layered, with a 1.2mm steel middle beam that stretches to the sides in a ‘airplane profile architecture’. Make no mistake, this is a solid, premium METAL scooter. 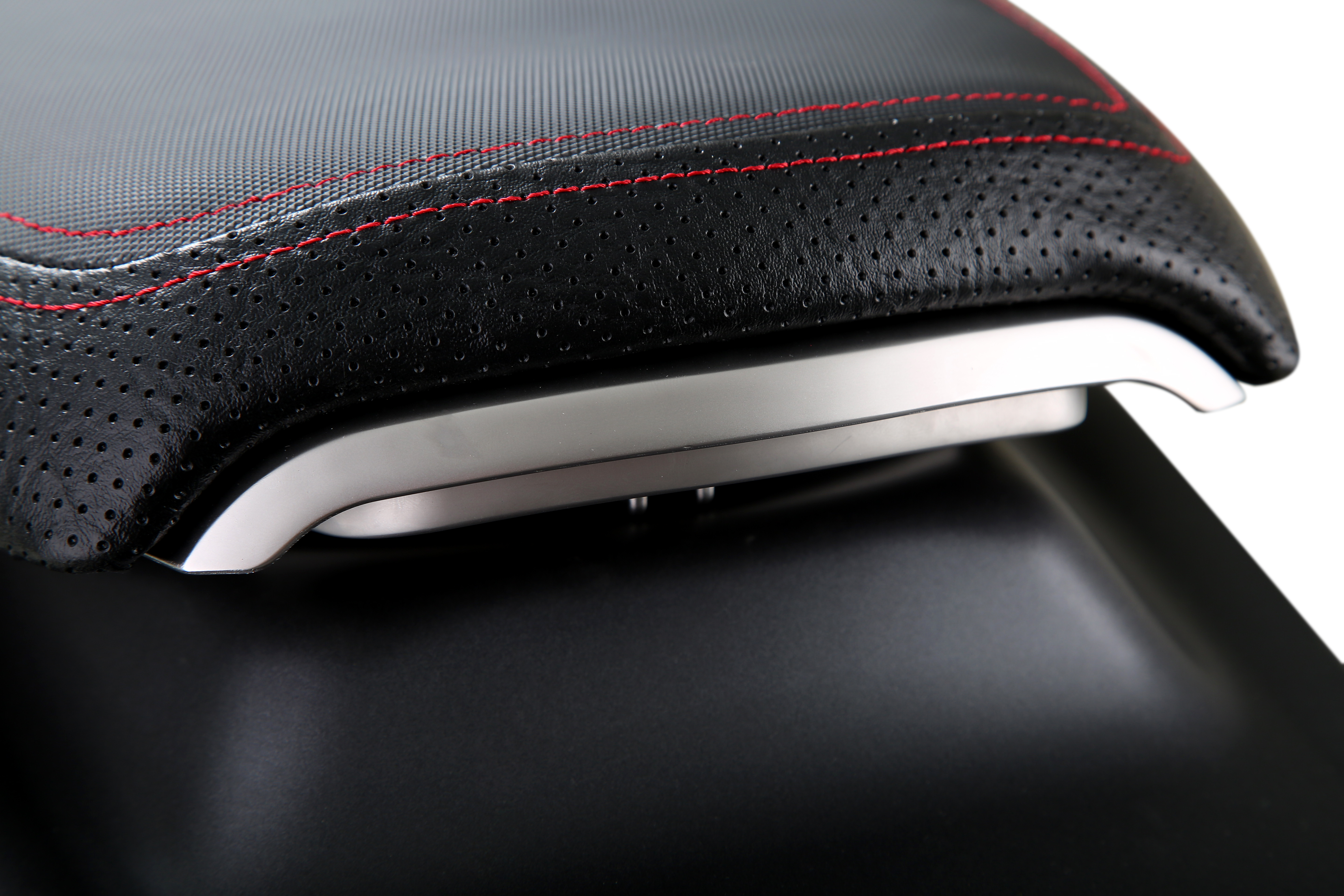 Attention to detail. The new Lambretta appears to have been finished to a very high standard. This is not a cheap and nasty scooter. Take the detailing on the seat, for example.

Pricing. To be announced. But I would expect it will be similar to a top of the range offering from Piaggio.

I’m sure more information will appear. In the meantime, check out the official website, here.