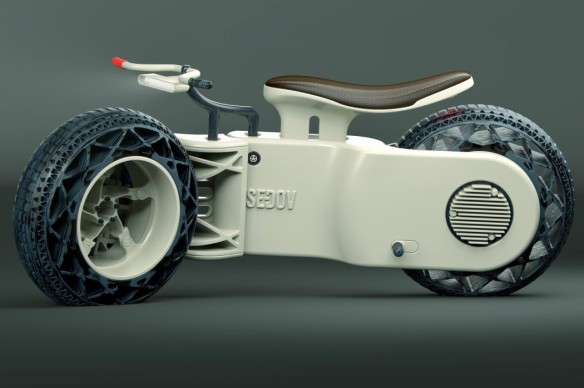 And bloody brilliant. Not a Lambretta (obvs – as the youth say these days). But now and again I like to post a bit of ‘industrial design’ that is somehow Lambretta related, or may inspire somebody in the creation of a ‘custom’.

This is a purely conceptual creation of Dennis Sedov. The bold, brutish straight lines and overall simplicity may be at odds with the sensuous curves of a classic Lambretta, so I’m not going to labour over a link, but there’s something about the aesthetic I love. Love the seat (and built-in back light), love the front light. Originally discovered on Yanko Design. See more of Dennis Sedov’s design work here, and his motorcycle designs here. 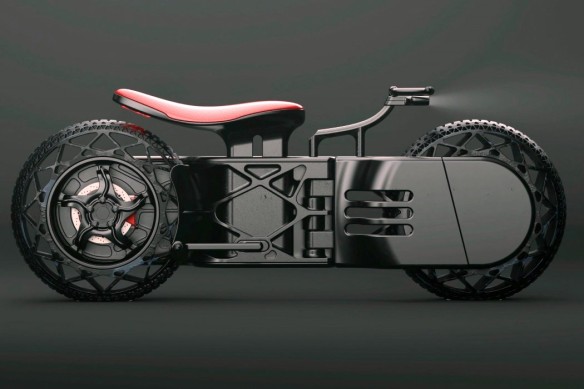 Got the heads up on the next Brightwells Classic and Vintage Auction at Leominster on the 8th March. As well as a clutch of other interesting cars and bikes there is a collection of Italian Classics from Andy Heyward… see the video above for an overview. The vehicles I’ve included below are a just a couple that caught my eye, get the full details on the Brightwells site… here’s a link to the online catalogue.

A rare Mercury Hermes scooter, built in the Black Country… 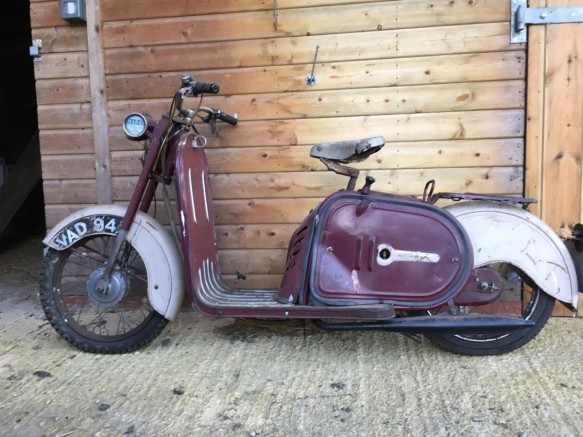 One I haven’t seen before, a Gitan Joligri from around 1970 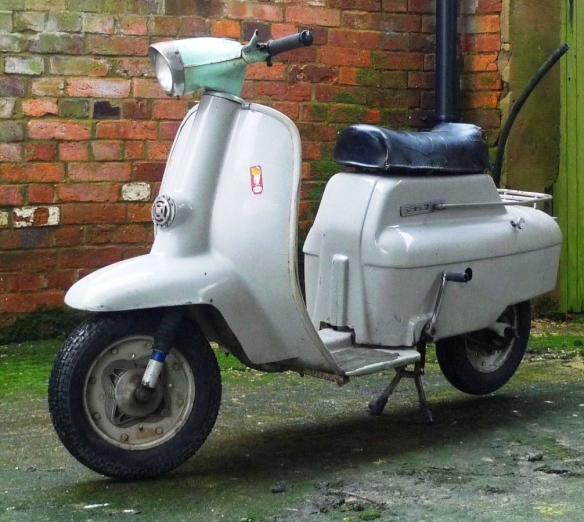 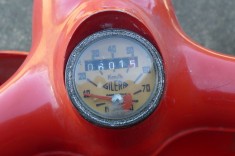 Another Rarity… the rather ‘awkward looking’ Ducati’s Brio. How could a company that makes such beautiful motorcycles produce something so fugly? 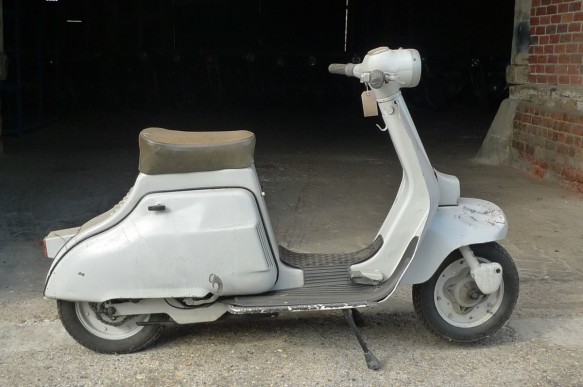 The equally awkward Casalini Sulky microcar… (Read the catalogue write-up for this one, it’s hilarious!).

The rather prettier little 50cc BM Pokerino… never mind a scooter I’d never even heard of – an Italian marque (Bonvicin Marini) I’d never even heard of! It appears to be sans side panels, which is a shame as I don’t think they’d be the easiest thing to source – but a nice, sporty looking little scoot. That ‘straight flush’ legshield badge is a cracker.

Next up an Italian marque you will have heard of… Benelli… one of a brace of Benelli’s in the auction… and the only motorcycle I’m featuring here (although there are plenty in the auction). A popular bike in Italy (and amongst Italian Motorcycle Fans). This Benelli Leoncino (Leoncino translates to Lion Cub in Italian) correctly  features the cast ali Lion mascot on the front mudguard… 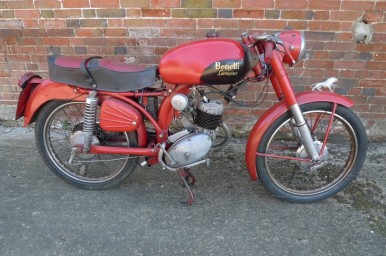 There’s a bunch of classic four-wheelers too… including a bunch of Italian classics, some lovely FIAT’s, Lancia’s and Ferraris, my favourite is this cracking little chocolate-brown Autobianchi Bianchina Speciale. It’s got an estimate of £2,500 – £3,000, which seems an absolute bargain to me! 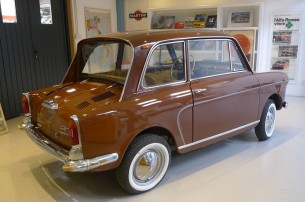 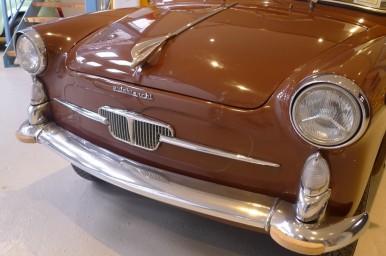 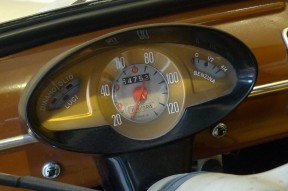 And finally for now, we’ll end on another scooter… the rather elegant looking Aer Macchi Brezza – the clean, aerodynamic lines demonstrating the aircraft manufacturing roots behind this company. With only 2,000 Brezza’s made, it’s a pretty rare scoot.

That’s it for now. See the Brightwells site for full details and how to get involved in the auction.

Sometimes, when Lambrettas were manufactured outside their native Italy, strange things happened. The models were ‘tweaked’ to better suit local tastes and markets. Occasionally, these changes are aesthetically pleasing, the turning mudguard on Spanish Series 2’s built in the Eibar factory for example. 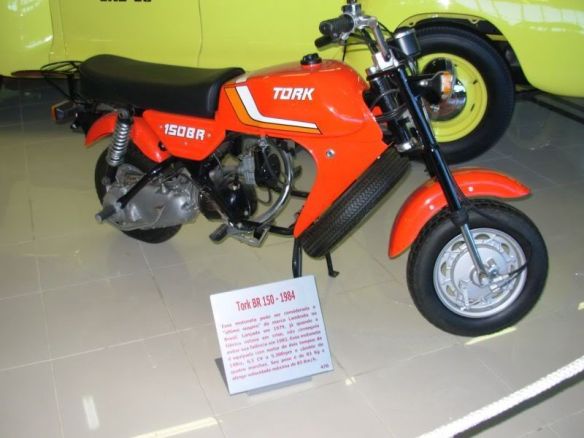 But – despite virtually every owner having their own idea of what the perfect Lambretta should look like – it’s hard to improve on the original Italian designs. It also seems that the further the manufacturers were away from Italy, the more they had free reign on creating their own, unique models. Nowhere more so than Brazil.

When they started making Lambrettas in Brasil, they looked pretty much like their Italian relatives. But as time went on, things got a little stranger.  I’ve touched on the pretty little MS before… and the monkey-bike styled Xispa – but I never knew about the Tork until I stumbled upon it on a website the other week. (on the red one, below, the extra lights are an obvious owner additional – who’s have thought of adding lights to a Lambretta?). 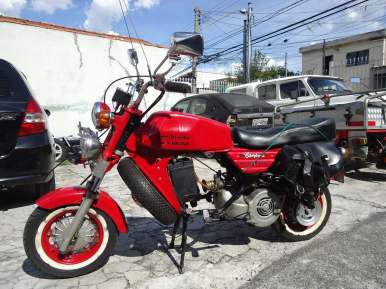 By the 1970’s scooters were as out of vogue in Brasil as they were in the rest of the world. From what I could gather, the Tork was built after a hiatus in scooter production (the factory had been sitting idle) as a last gasp attempt to gain back a bit of market share from Japanese motorcycles flooding into Brasil (and most of the rest of the world) at the time. It was all to come to a grinding halt when the factory went bankrupt in 1982.

To my eyes, the Lambretta Br Tork (to give it it’s full name) seems a desperate attempt to make a scooter look like something it’s not – a motorbike. Ironically, in the original scooter boom of the fifties, it was the other way around, with every motorcycle manufacturer trying to make their bikes look more like scooters. Funny old world. 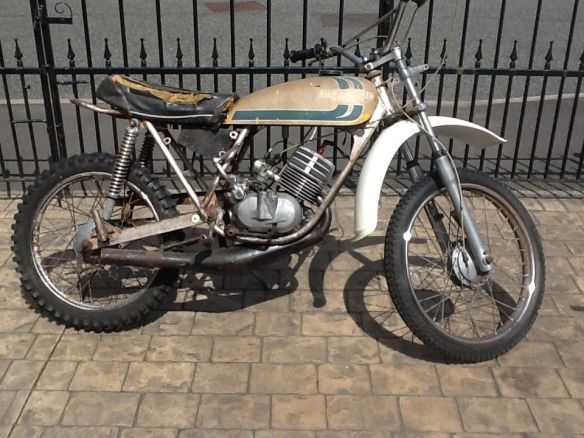 Here’s a bit of a rarity I stumbled across on eBay, a dual Lambretta/Serveta branded scrambler style 50cc motorcycle (It ain’t a moped – see the comments).

Now, normally when you see the words ‘very rare’ you can take them with a pinch of salt, but this is the real deal, especially in the UK – although slightly less so in it’s native Spain. Dating from the late ’70’s the Puma came in two variants, the ‘Endure’ and the ‘Puma Cross’ the Puma Cross having 5 gears – itself pretty unusual for a moped.  It’s in need of a little TLC, but comes with a bunch of spares. The only bit that doesn’t look quite right to me is the exhaust… I think the original may have come up a higher, following the lines of the mudguard…

Rarity usually demands a premium in the Lambretta world, but this is currently sitting at just £400. If you’re like the look of it, or just fancy something a bit different for your Lambretta collection get your bid in!
Here’s the eBay link 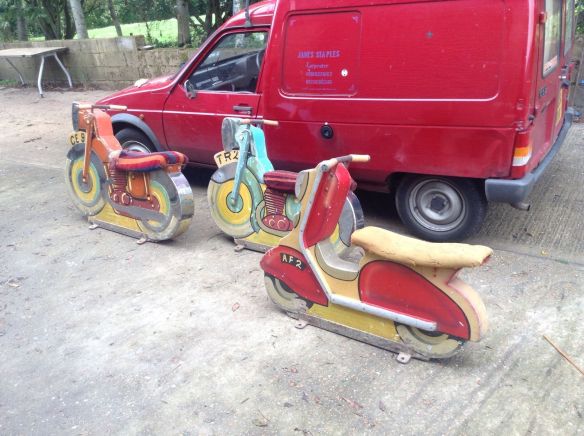 A cute set of three bikes, one of them clearly based on a Lambretta, from a 1960’s fairgorund roundabout. Some scrapes and knocks, so if ‘it’s gotta be perfect’ maybe not for you (see what I did there?) but you might think, for a bit of period fairground memorabilia for £875, (for all three) ‘It’s gotta be worth it’.
Check them out on eBay here. 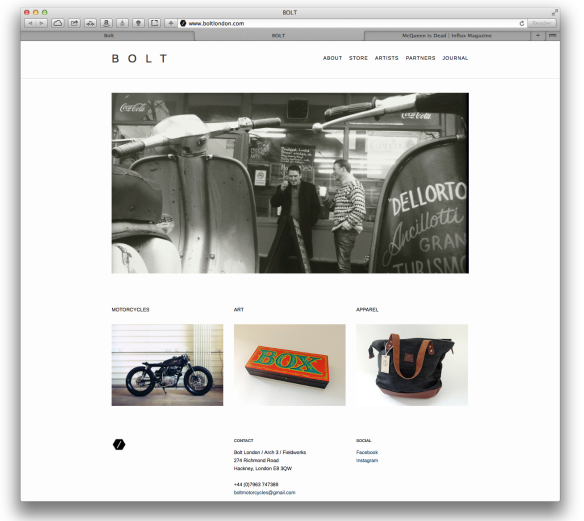 Online mate David Hardy, designer and Lambrettista, has designed the identity for a new kind of shop… Bolt, in Hackney, London. I’ve had to go to Hackney a few times recently, and there’s a real buzz about the place… lots of positive energy, and good stuff happening, and Bolt is one of them.

So Bolt… it’s a showroom for one-off, custom built motorcycles, a hang-out / meeting point for ride-outs, a shop for a range of perfectly chosen apparel, and a gallery… all inspired by the motorcycling lifestyle. And when I say motorcycling, it’s a broad church, you are as likely to see a vintage Vespa or Lammie parked up outside as a BSA or a Triumph. I haven’t managed to get down to Bolt yet, but it’s on my list next time I’m over Hackney way.

Harley Davidson… you’ve got some competition. The japs have tried, but, Honda Goldwing aside,  have never quite puled off the big cruiser thing. I’ve been keeping half an eye on Indian motorcycles over the last few years, and it looks like 2014 might be the year they’re back with a bang.

They’ll certainly turn a few heads. But what’s this got to go with Lambrettas? Nothing really. I’ll occasionally post about another marque that catches my eye. They’ve got a cool logo. And my Grandad used to ride one, way, way back. Enough reason for me.

It’s got to be at least a week since I posted about helmets… so here’s something a bit different from Bell… with a ‘weapons grade’ look about it. More than a open face helmet, the additional “muzzle” is ‘purpose built to guard against the elements’. I know when it comes to helmets it’s not all about looks, but this would look great on the right kind of scooter! Available in military colours; Gunny, Black (Matt & Gloss) and Solid Army Green.

I think the Gloss Black looks particularly impressive… in a slightly scary way! 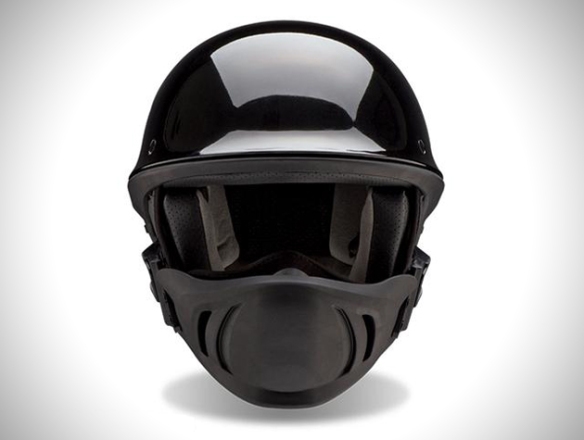 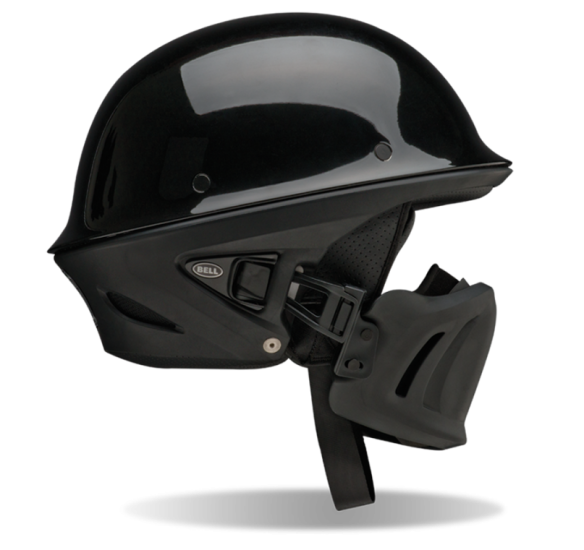 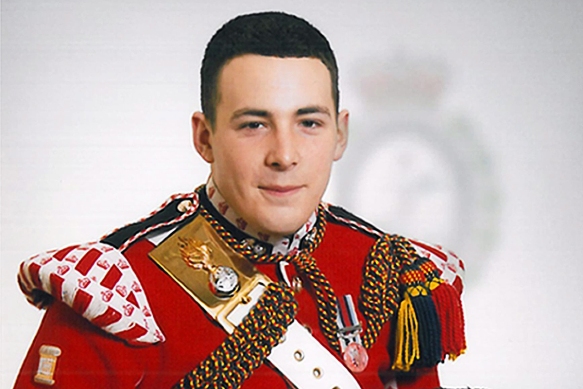 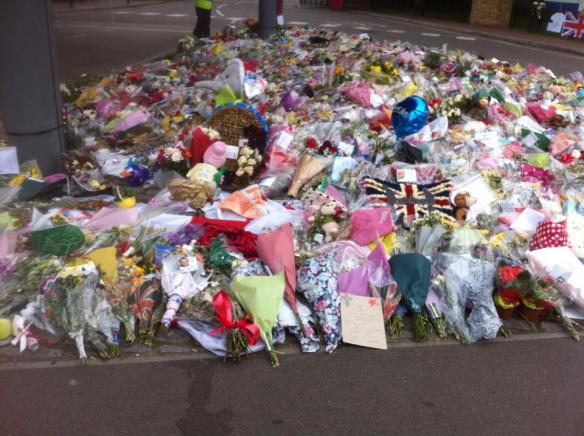 Well done all scooterists, bikers and others who turned out to honour the memory of Drummer Lee Rigby, horrifically and brutally murdered on the streets of our capital city. An emotional day for many, marked with due respect.

Want to do something positive? Visit Help for Heroes.

United in support.
There has been an extraordinary public reaction to the brutal murder of Drummer Lee Rigby last week. Hundreds of thousands of people, revolted by this dreadful crime carried out in full view of other innocents, have united to show that they will not be intimidated.

For many, that desire to show support has been focused on doing good to counter the bad. H4H was created in 2007 out of a simple desire to ‘just do something’. We were distressed at seeing so many young men and women with dreadful injuries and wanted to help. Over the last five and a half years that simple desire to ‘do our bit’ has enabled thousands to benefit and has proven that we are not helpless; we can and have done something very good indeed.

With the sad demise of Posterous, the ‘platform’ which got me started on blogging in the first place, I had to look round for alternatives. WordPress seems the way to go… so here I am. All the old content from the Posterous site should import later… and things might look a little different around here… but rest assured it will still be dedicated to “the world’s finest motor scooter” The Lambretta.

In the meantime, until the end of the month, you can still check out the old Lambrettista here: http://lambrettista.posterous.com/