In the UK, we tend to think of the Lambretta as a fashionable, aspirational brand, associated with youth culture. Arguably, the hey-day of the scooter was before the days of the mod – when post-war austerity and a fuel shortage exacerbated by the Suez Crisis prompted the trend away from cars – well, big, thirsty ones anyway – and onto scooters. But the one era most people identify with Lambrettas is, of course, the Mod days of the 60’s. At least in the UK.

It’s very different in other parts of the world. In the late 60’s and into the 70’s the Lambretta was very much a workhorse scooter. Although glamourized to some extent by Bollywood,  and initially appealing to the growing middle class – the appeal to the masses was very much more practical than prestigious.

For a lot of Indians, the Lambretta was seen as family transport – able to transport four(!) in relative comfort – ” It could accommodate 4 people easily. A family of four including two children. One would stand in the front portion ahead of the seat and face the wind. The two elders would sit on the seat and the second child on the spare tyre at the rear of the Lambretta scooter.”

Lambretta’s were produced in India from the 1950’s by API – initially assembling parts shipped from Italy, and then manufacturing them from scratch in their own factories. They produced a variant of the Series 1 LI150, and then moved on to produce the Series 2. For most Indians, the Series 2 is the Lambretta.  In 1972, however, the State-owned SIL (Scooters India Limited) acquired the rights to the Lambretta name, and all API Lambrettas after that were sold under the name “Lamby”. These continued in production for many years, and in vast numbers – but, as mentioned, there was a new player in SIL. 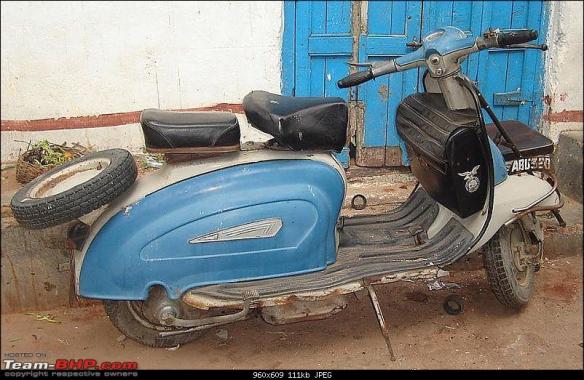 SIL didn’t mess around with old models. After making a few 100cc Centos, they swiftly moved on to the model they are known best for – The GP. Although, rather confusingly, after acquiring the sole rights to the Lambretta name in India, the GP was sold under a number of different names, including the Vijai Super, Vijai Vulcan, Vijai Deluxe and the Allwyn Pushpak. There’s some great vintage footage (starting about 04:56) of these ‘Super Scooters’ in the video below.

As time went on, and with less and less access to original Italian GP’s the export market for ‘made in India’ Lambrettas grew. Initially slagged off as second-rate ‘curry burners’ (sorry if that sounds racist, but that’s what everybody called them, back in the day), their reputation grew to that close to their Italian forefathers. Ok. Not quite, but you certainly wouldn’t be embarrassed to ride an Indian GP these days.

Domestically, the Lambretta was far from the only game in town. Where there’s a Lambretta, there’s usually a Vespa a little way behind. Or in front. It depends on your preference – you know mine. Anyway, an Indian company called Bajaj had been importing Vespa’s since the late 40’s – and in 1958, started manufacturing under their own steam both two-wheelers and rickshaws, both based (I think) on the Vespa Sprint.

It wasn’t all over for API though… and their trusty Lamby 150 (based on a Series 2, remember), had one last throw of the dice in the late ’80s. Although a very dated (or should we say ‘classic’) design next to the GP based offerings of SIL, it had still sold pretty well domestically. With optimism you’ve got to admire, and a fresh new design out of Miyazu, Japan, they launched their final Lamby model – The Polo. With redesigned legshields, headset and headlight, sidepanels, a horrible PX style horn casing it came with 12 volt electrics and mod cons such as indicators. Although it was basically a Series 2 under the skin, there was a lot of late 80’s Vespa about it – and it was none the better for it. The last one rolled off the API production line in 1992… although with a nod to it’s Series 2 toughness, and the Indian owners creative ability to keep them running, they stayed a staple of Indian transportation for many years after that. 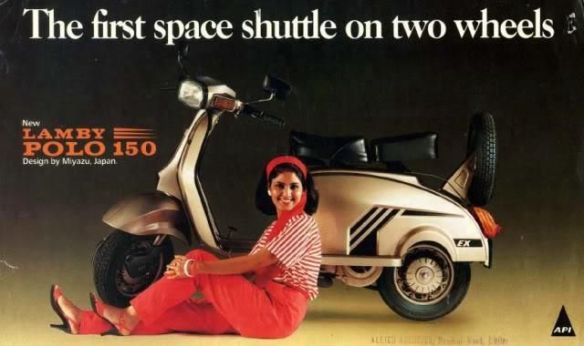 I wrote about the Polo, rather disparagingly back in 2013 https://lambrettista.net/2013/06/09/does-your-scooter-smell-of-mint/ – perhaps I’ve mellowed a little. Perhaps not.

The Lambretta still has a strong following in India, and a lot of people still remember their dad’s, or uncle’s Lambretta fondly as the key means of transport for the family. India, with it’s vast population, may just be the most important market for the new models being produced by Lambretta today.

Anyway, if you’re reading this in India, or you’ve got a better knowledge of the story of Lambrettas in India, please get in touch or leave a comment below. And if you’ve got pictures of your Lambretta – wherever you are in the world, and would like to share it with the world – I’d be more than happy to feature it on the blog. 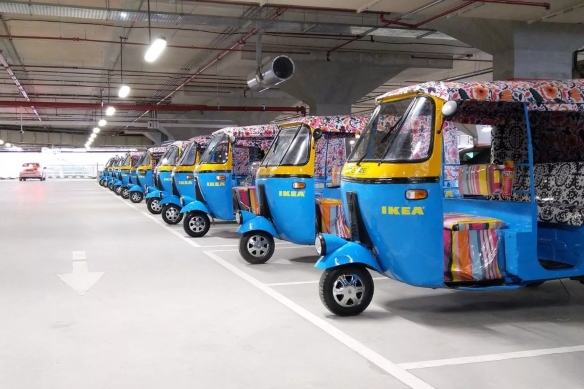 Originally based on the Indian version of a Vespa Ape, the three-wheeler rickshaw is ubiquitous throughout the Indian sub-continent, and indeed Asia. Ikea is using a solar-powered of these as at least 20% of their delivery fleet for their new Hyderabad flagship store.  The Ikea version will be charged at the store, running off of solar power harvested from 4,000 panels on the roof. Any excess energy gathered will be used for lighting and inside the store.

Link to the original story on Curbed.

Just to add some Lambretta flavour, here’s a  couple of (very) short videos of the Lambretta version of the three-wheeler commercial vehicle, The Lambro. 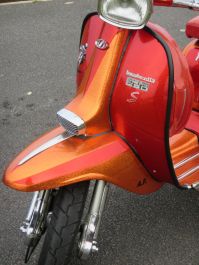 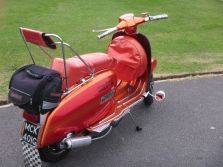 If you promised yourself one like this in the eighties, and you can afford one now, wtf is stopping you? Here’s the eBay link.

Came across this oddity on eBay. We all know SIL made Lambrettas after production stopped elsewhere. Known in the halycon days when you could pick up an Italian S2 for £50 as “curryburners”, today Indian Lammies are just accepted as part of the mix. There were other Lambretta based oddities like the Lamby Polo and Kelvinator Avanti, both featured on the blog before. But here’s a new one on me, the SIL Lambretta Sunny. 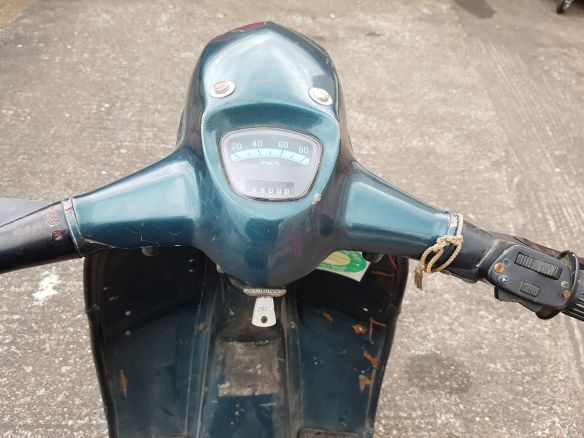 Looking like a Cento with a SX / Serveta style headset, a grotesquely oversized seat and the ugliest horncasting that’s ever been bolted to a scooter it would be a real talking piece.

I like the kickdown rear footrests… although they’re branded Bajaj (the Indian company who made Vespas under licence) so I guess they’re an aftermarket addition.

It’s available on eBay for a smidge under £800. Here’s the eBay link. 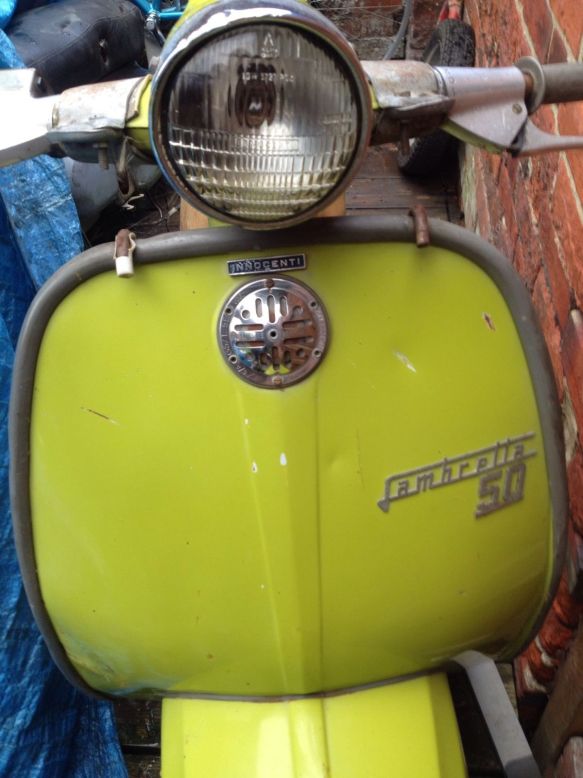 If you fancy something a bit prettier, and more, er, Italian, for about the same money (£100 cheaper actually!) There’s this J50 Delux. It’s got 50 less cc’s but it is in what’s probably my favourite Lambretta colour, Mela Verde (or Apple Green).  You’ll need to be a bit handy with the spanners, because although it seems to be complete, it’s in bits. Here’s the link for that one.

Reading in this article from India’s “The Hindu” online newspaper about the new found respect for Lambretta’s in India. SIL, (Scooters India Ltd) are still a going concern, still rolling out factory fresh GP200 engines like this one on eBay

(I think they are still making them, they may have a big warehouse full of NOS somewhere!).

There are the usual newspaper inaccuracies about Lambretta history of course, but we’ll skip past them, to get to a nugget of info that stopped me in my tracks. Back in the day, the Lambretta scooter became the preferred personal transport of white-collar workers on the subcontinent, mostly government and bank employees. Soon, demand far surpassed production, and the waiting list for the vehicle lengthened. And lengthened. Mr Mr Raveendran, ex Superintendent of Government Gardens and Parks takes up the story;

“In the 60s, you could buy a Lamby only through the State Industries Department. One had to book the scooter and wait for a minimum of six years to take delivery”

Did you get that? A SIX YEAR waiting list! Although, as ever in life, it’s not what you know, it’s who you know. Mr. Raveendran managed to jump the queue, and get his scooter in two weeks.

The original article is here.

Don’t know much about this video, other than it was shot by Yashasvi Juyal, and (I think) he’s from Northern India. Give us a shout Yashasvi, and fill in the blanks! 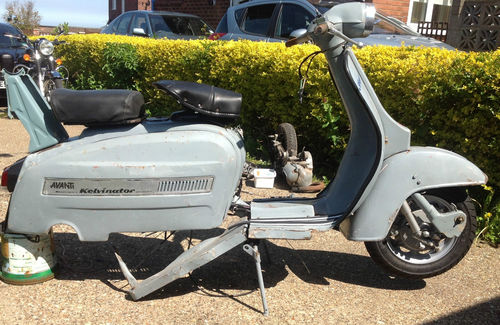 So, I know the name Kelvinator… they make fridges, freezers… that sort of stuff right… oh yeah, and Lambrettas. Of a sort. Well to be honest, I didn’t know that last bit. So, as well as companies like SIL and API, and even Vijai that I know were making Lambrettas under license in the subcontinent, so was a international maker of white goods. Weird. 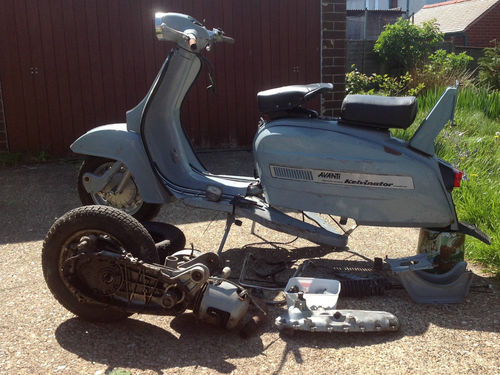 And there’s one for sale on eBay. Ok, it’s in bits… and it suffers from many of the same ‘styling issues’ as the Lamby Polo that I posted about previously… but for some reason I don’t mind the look of this one so much. Maybe it’s because the paint isn’t so lairy. Or the panels are a bit better. The V*spa style headlight is weird, but not too ugly… and it has got a similar horrible (imho) PX / Polo style horncasting. But if you can live with all that, and you fancy a proper ‘curryburner’ with a difference, you can buy it on eBay, here. And it’s cheap for Lammie.

Like Loading...
Been a few video posts recently, here’s one I came across on the ScooterDiva blog, and had to repost.

Bit of culture for you, Lambrettaphiles… some fine art Indian artist Haribaabu Naatesan. “Using mostly electronic waste (e-waste) from gadgets and gizmos like motherboards, floppy discs, CD drivers, cellphones, CDs, etc, artist Haribaabu Naatesam reassembles them together to create incredible works of art. Aiming to liberate waste from its lowly condemned position, Naatesam breathes new life into junk pieces turning them into everything from birds and crabs to shoes and transportation.” Call me shallow, but I like it ‘cs it’s got a scooter in it! 🙂

From My Modern Met, via Design You Trust

Towards a catalogue of London’s inter-dimensional gateways