The Simson Schwalbe (German for Swallow – the bird you smutty minded lot) was, for those that don’t know, a classic East German  scooter/moped. It followed the ‘enclosed motorcycle’ model with larger 16″ wheels than classic Italian scooter. Extremely popular in the DDR back in the day, it’s now the latest classic scooter to be re-invented as an electric ‘e-scooter’ – joining the likes of Cezeta and Lohner. 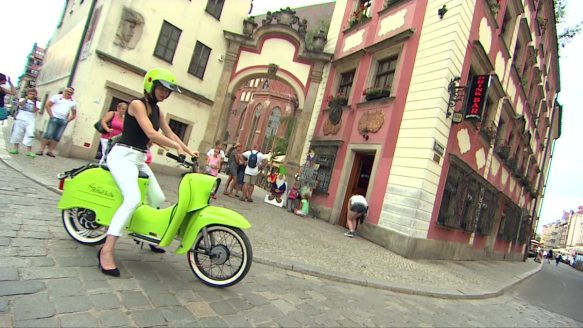 It’s been hard to come across hard and fast info about the new electric version of the Simson Schwalbe… but here’s what I’ve gleaned from various sources. Any errors are mine, due to my inability to read any language other than english, and the limitations of Google Translate. So, here’s what I know.

We should know more when the promised production model is revealed at the end of the month.

As yet, there’s no further information on a electric Lambretta, the electric Scomadi that was showcased at EICMA a few years ago, or an electric version of the forthcoming Lambretta Vendetta. But who knows what the future will bring.

If you’re interested in electric scooters, check out these posts on the Fido and the DonGo Bare Bones too.

UPDATE: Reader Fabian has done some reading for me, and there’s a little more history of the e-Schwalbe in the comments… Worth a read! (It’s the last yellow tag at the bottom of the post with “replies” in it if you can’t find the comments).