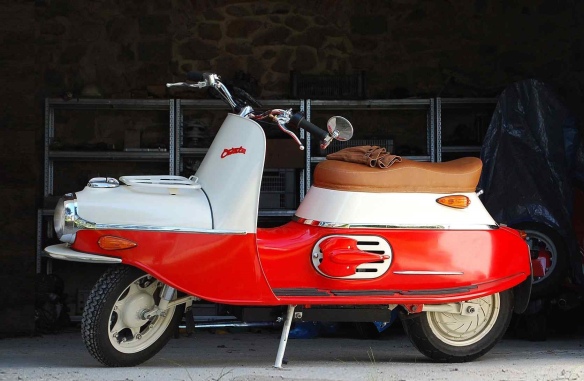 The Cezeta is back – and it hasn’t changed a bit (apart from being electric!). The distinctive Czech scooter has returned in a design virtually unchanged from the original models produced in the ’50s and ’60s. And it’s all the better for it. You’d be hard pushed to spot any difference between these new models and the originals – in fact, you’d be on a hiding to nothing as the prototypes shown are originals, modified to fit the new power unit.

That’s the one BIG change. As mentioned… she’s electric! Some will mourn the passing of the original 175cc 2-stroke engine, but this is the 20-teens and an electric power unit is the way forward. She’s got a top end of 50mph and a range of 60 miles (extendable to 120m). That’s plenty to commute in style.

Regarding the styling… it’s certainly unique. I’ve been less than kind to the Cezeta in the past, but I’m warming to the Cezeta’s idiosyncratic looks. Perhaps is years of conditioning so my brain thinks a Lambretta is the way a scooter should look.  There’s something quite hipster (in a good way) about them, and they’re far more attractive (and authentic) than the majority of modern attempts to create a retro scoot.

Although by nature I’m a bit of a traditionalist, I’m also firmly in the EV (Electric Vehicle) camp. I think this scoot marries the best of both. Retro styling, with a modern, clean power unit. There was talk of an Electric Scomadi a while back, (last I heard it they are still “working on it”)  and, although unlikely, maybe – just maybe we’ll see an electric version of the “new Lambretta” the L70 on launch (more of that later!).

There’s a ton of more information, including a road test and an interview with one of the guys behind the revitalised Cezeta brand (brit Neil Smith) over on the ScooterLab site.

It’s great to see these ‘lesser known’ (in the UK anyway) scooter marques making a comeback, with Cezeta joining the likes of Lohner and Cushman. Find out more at the Cezeta website, where you can reserve yours today, or pop over to Prague and visit their shop.

The video’s worth a watch too…

1 thought on “Czech this out!”