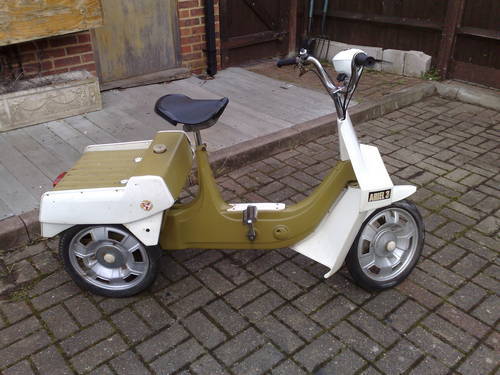 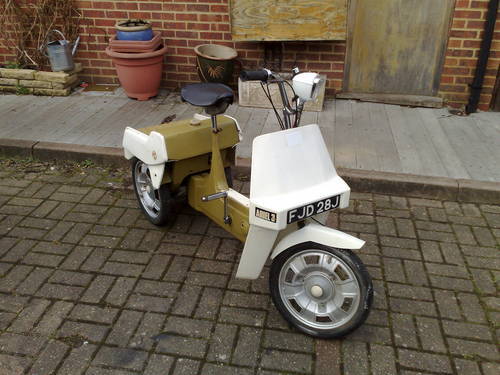 Right. First off, this clearly comes under the “That’s not a Lambretta” header. But until I get round to writing a proper piece about Lambro’s, this’ll have to do you. I’m not sure it even comes under the category of scooter. It’s actually a BSA Ariel 3.

Being a proper moped (notice the pedals you have to use to start it) It wouldn’t be quick. I can’t imaging that once you loaded up the ‘luggage area’ (that would take lttle more than your average topbox) you’d be breaking many speed limits. Even going downhill, with a tailwind in a 30mph zone. In fact, it would be one of the few vehicles on the road I would stand any chance of overtaking.

As with most items in those halycon days before the PC brigade had any say, the advertising shots featured a girl in a bikini. Although, to be brutally honest, I can’t remember a time I saw a vehicle with less sex appeal!

And it’s for sale. So why not get yourself a piece of British motorcyle history? The downside, The Ariel 3 is ugly, slow and impractacle. The upside, it’s rare, and actually it’s SO ugly, it’s strangely attractive… and it’s proper 1970’s… right down to the baby-poo and white colour scheme. Biggest upside though is it’s cheap. It’s on sale on the Car&Classic website for a mere £450. So if your a hipster with a thing for the seventies… like three wheel but can’t quite scrape together the cash for a Bond Bug, you may be able to bag yourself a bargain.