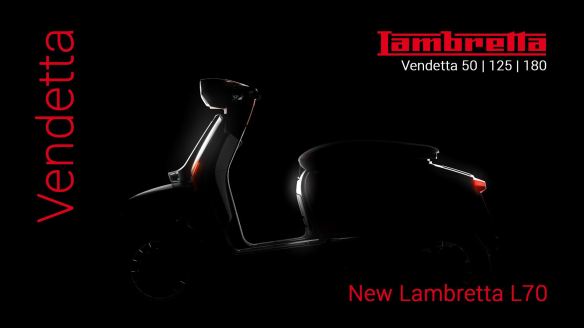 The new, official Lambretta has been announced… with little more than a silhouette and a new name “the Vendetta”. I’m liking both. The silhouette looks very traditional, and although it doesn’t reveal much, it looks very promising! The name? Lambretta Vendetta? Fantastic. Hinting maybe at rekindling the old rivalry with Vespa? Are we going to see a ‘wasp killer’? (yeah, good luck with that one, but it’s good to have ambition).

The one other thing we do know is the proposed capacities of 50, 125 and 180cc’s. Seems a reasonable line-up. I expect we’ll see the L70 designation dropped, as calling a machine a “L70 50” would be confusing, to say the least. And Vendetta is a great name. Stick with that lads.

The counter on the official page, has reset to 42 days, (which takes us to the middle of June) when I guess we’ll know a little more. I’m guessing we won’t see everything until a big reveal at a show (I don’t think there’s anything in June). I’m guessing it won’t be until EICMA in November, in Milan that we’ll see the Vendetta ‘in the flesh’. But so far, so good! Stay tuned.

UPDATE: Sticky’s thoughts over at ScooterLab add more to the picture (as does his forensic Photoshop skills). I’m really liking the elements that reflect the original Lambretta lines, especially horncasting. The upward sweep of the bodywork gives the scooter an aggressively sporty stance. From what I’m seeing, it won’t appeal to those traditionalists amongst us who only want something with an Innocenti (or Eibar or SIL) badge on it, but if you’re in the market for a Scomadi, you might find you have another option.

FURTHER UPDATE: In a Press Release, Sébastien Stassin of KISKA (The design house behind the Vendetta design) said: “Lambretta is a treasured brand – a cult icon whose global cultural impact is as relevant today as it was last century. It’s not often that you’re given the opportunity to play an instrumental role in such a relaunch. The design team is honoured and excited.

Having relaunched Swedish motorcycle brand Husqvarna Motorcycles in 2014, and contributed largely to KTM’s brand success over the past 24 years, KISKA is up to the task. Working closely with the global development and investment team, Lambretta Consortium, KISKA has aimed to evolve the Lambretta design language, positioning it to take on the future realities of urban mobility, while honouring the brand’s compelling heritage.”