Spoiler alert. There’s NO Lambrettas in this post. Even the “new Lambrettas” are conspicuous by their absence from this years EICMA Motorcycle Showcase. And I don’t like modern scooters. With some very few exceptions. Sounding like a grumpy old man watching Top of the Pops (that ages me), where “It all sounds the same” They all pretty much look the same to me. All angles and plastic. Nah. I’ll stick to something classic and geared. But every now and then something comes along and makes me look twice. Last time it happened it was the Vespa 946. A stunner. Before that it was the back to basics charm of the Honda Zoomer, or Ruckus as the colonials would have it. And this years EICMA has thrown up a couple of interesting little oddities.

First is the all electric etropolis Reload… now metropolis (and the lower case “e” is deliberate btw), are a German company that make some distinctly average looking electric scooters. Which is probably not a bad thing for etropolis, or people that like modern scooters. Just for old farts like me that like proper scooters.

But their new Reload takes the biscuit… and dunks it. It looks like someone has taken a modern scooter and hacksawed the arse off it… and then sawn any other extraneous bits of plastic off too. And as a result it looks, we’ll… rather good actually. In an awkward, ugly kind of way.

It’s electric, so the performance and range are going to be pretty appalling, but at least it looks, well, different. I like it. Until of course Etropolis go and load it up with more carriers and shopping baskets than a Tescos carpark. Oh well.

Worse, for me than a generic modern scooter is a modern scooter trying to pass itself off as a retro classic. Vespa have managed to pull it off, just about (he says through gritted teeth), and are even improving. The new 946 and Primavera are very pretty scooters. The recent reinvented “Lambretta” LN, LJ and LT made a decent enough fist of it, capturing some of the spirit of the original Lambrettas… but unfortunately, despite good reviews, it appears they haven’t been able to challenge the likes of Piaggio.

Likely to be more successful, unfortunately, are these ‘neo-retro’ monstrosities  from Peugeot… just horrible, bloated and obese looking machines. In my opinion of course. Which is a shame, because they made some decent looking scooters back in the day… well the arse end looks ok, don’t think much of that fugly fender… 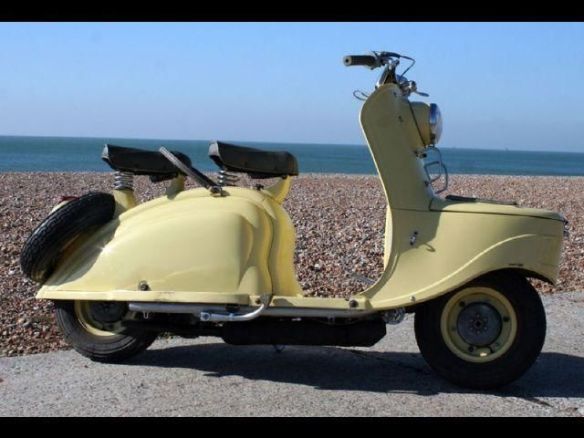 Jumping back to electric scooters, and another honourable mention goes to another back to basics design the “Q” , a dutch design that is all about the frame. It kind of reminds me of the FIDO concept, I posted on my original “CrocodileJock” blog, way back.

But what really caught my eye at EICMA this year wasn’t a scooter at all. It was a brace of bikes from someone who traditionally doesn’t even make bikes. British Car firm (and there’s not too many of those about) Caterham, (yes THAT Caterham) have launched their first ever motorcycles. And they are stunning. Really eye-catching radical designs… with three very different models, the beefy Brutus 750, (which can operate as a street bike, off road machine or even a SNOWMOBILE!!!) the “Classic E bike” an electric bike that harks back to the earliest days of motorcycling for it’s design inspiration, and the “Carbon E bike” another e-bike, but rather than looking like it’s come from some reimagined steampunk past, this one is straight from a science fiction future. Find out more, here. And there is a Lambretta link, of sorts… the designer behind the brute that is the Brutus is Alessandro Tatarini. If that name rings a bell, it may be because you recognise it from the Lambretta LN launch… yes, he was the designer behind that, too.

I think they are absolutley stunning designs…  and while there not going to be everybody’s cup of Tetley, that’s kind of the point of them. An alternative two wheeler for people who “Think Different” and the stars of the show for me. That and the Scomadi’s of course.