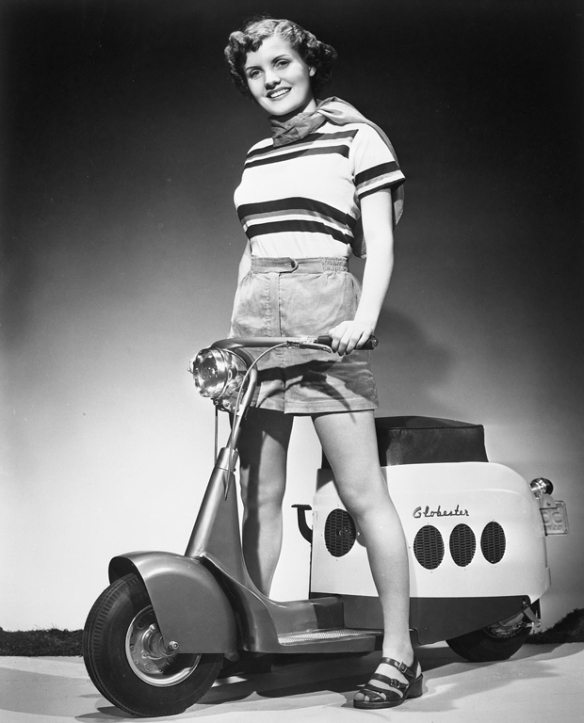 I can’t find out much about Globester scooters on the web, but the one thing that stand out from these pics is that they are so ahead of their time… Found via the excellent Retronaut site, (one of the non-scootering blogs that’s on my regular reading list), they date from 1946… I think that just relates to the top pic though. I think that’s pretty amazing, I would have guessed the fifties at the earliest. When you think that Innocenti’s  Model A, on the face of it a much less sophisticated design, dates from 1947, you get the impression that American scooters had a definite head start on those from Italy!

The ad above does come from the nifty fifties, and the one thing that strikes me from that is that is the price… the Globester doesn’t strike me as a cheap scooter! I don’t know why the Globester wasn’t a bigger success, maybe it comes down to engineering, reliability, price or fashion, but it’s certainly not as well known (this side of the pond at least) as that other iconic US brand, The Cushman. As an aside, did you know you can buy a brand new Cushman today? Here’s the link.

The other Cushman link on the blog worth checking out, if you like this kind of thing, is a beautiful custom job, check it out here.

This films been around since 1991, and I’ve only just noticed that the main character, Topper Harley is probably a scooter reference. Duh! Now, I was sure I’d written a Harley Topper before, but I was probably thinking about the other indigenous US Scooter, the Cushman (post here… worth checking out… oh, and this one).  Anyway. I hadn’t.

The Topper was the only scooter Harley Davidson every produced. Made between 1961 and 1965, and despite it’s squarish, “50’s American Refrigerator” lines, it’s certainly not a bad looking scooter. (That last sentence just shows how much my aesthetics have changed over the years… I remember when I first saw a picture of a Topper I thought it unbelievably fugly!). Let’s just say it’s “of its time”.

There’s an owners club, with a ‘virtual website’ (a tautology surely? perhaps an ironic one) here.

In a postmodern twist, Topper himself has his own Facebook page, here.

Anyway. Back to Hot Shots, and my favourite line:

Topper Harley: You’re the only one that knows how to get to the ‘copter pad. If I’m not there in 15 minutes, you know what to do…
Colonel Walters: Yeah, get the hell out of here!
Topper Harley: No! Wait another 15 minutes!

That’s right folks. I never saw this one coming! Cushman’s are being made again in the US, by K-Jack Motors in California. And they look pretty good too. Those that know their Lambretta history will know the original Lambretta’s owed more than a little to the Cushman, who were around since the early 1900’s… and their “Airborne” model scooter, dropped with US paratroops in Italy during WW2. When Innocenti (and Piaggio) had to re-engineer their factories from making military vehicles and armaments, many regard the lightweight Cushman scooters as a spark of inspiration for both these companies. 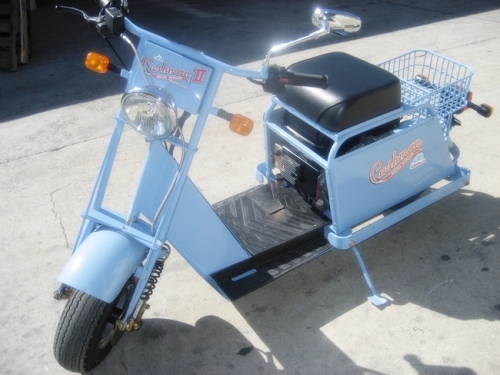 The rest is history. The two italian firms went on to dominate scooter production in the 50’s and 60’s, firstly in Italy, then Europe, and finally worldwide. Without the styling elan of the Italian models, the Cushman became regarded as a bit of an oddball… at least in Europe. Even in the US, Italian scooters were seen as sophisticated and cosmopolitan.

But the world has changed… and in an era of generic, plastic scooters these re-engineered Cushmans have more than a little elan of their own. They are certainly stylish, and certainly look much more like the original Cushman than the new Lambretta’s… look to their predecessors.

There are two models, (see EDIT / UPDATE) the Highlander and the Step Thru. Equipped with modern engines – up to 400cc, disk brakes front and rear, and an all steel frame, they are nippy, and sturdy too. The styling that I used to regard as laughably clunky and boxy now looks (to my eye, anyway) funkily utilitarian, and retro chic. The day of the Cushman may finally have arrived!

EDIT / UPDATE: Jack Chalabian of K-Jack has been in touch to tell me there are actually FOUR models of the Cushman II in the pipeline…  the Highlander, Step-Thru, Eagle, and Trailster. They will have a 9 or 14 horsepower overhead cam engine with electric start in all the models. While trying (and succeeding, I reckon) to keep the original look with modern DOT requirements; they are compliant throughout the United States… including California. 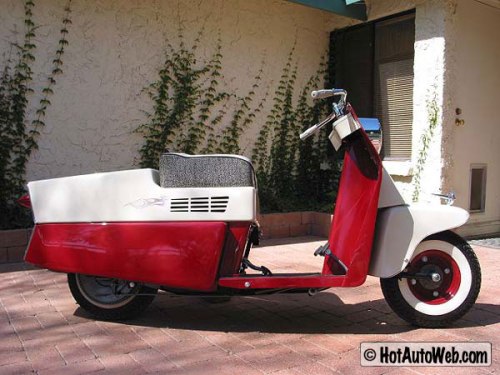 If the Russian Tula I posted the other day doesn’t appeal, howsabout something from the other side of the cold war. Filed under “it’s not a Lambretta, but it’s pretty darn cool” department… I bring you this lovely custom Cushman. Cushman scooters hail from the good old US of A, and while many european scooters tried to ape the lovely curves of the Lambretta and Vespa, with varying degrees of success, Cushman plowed their own furrow.

Instead of a set french curves, the designer used a good old ruler.
This example dates back to 1960, and is a customised Model 520. The customisation is pretty tastefully done, some nice pinstriping, a ’59 Cadillac tailight, and the dice detailing on that mysterious lever on the left side of the scooter. (I think it opens the engine compartment). It’s the epitome of the 1950’s Vegas Loungebar aesthetic, scooter style!
Better than all that, it’s for sale, here, so if you’ve got the yen for something different, and the Soviet Tula, stick an offer in. Oh, and if the model looks kinda familiar to you, you’re probably thinking of that Bo Diddley LP cover… 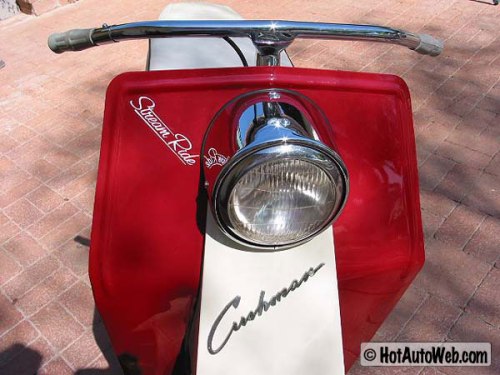 There’s some beautiful scooters over at the Peterson Automotive Museum in Los Angeles, where alongside the Americana, historic vehicles and supercars they are running a special Scooters Exhibit until May next year. Here’s a video of what you can expect to see if you go.

There’s a lot here that fits into my own person category of “oddball”, which basically means anything that isn’t a Lambretta or V*spa… please note that is not a derogatory term, I would love to own a Moto Rumi for example… I’m even starting to see the charm of those Cushmans and Salisburys these days!
If you’re in the LA locale, it’s worth a visit.
Video, and heads up from JohnnyScoots