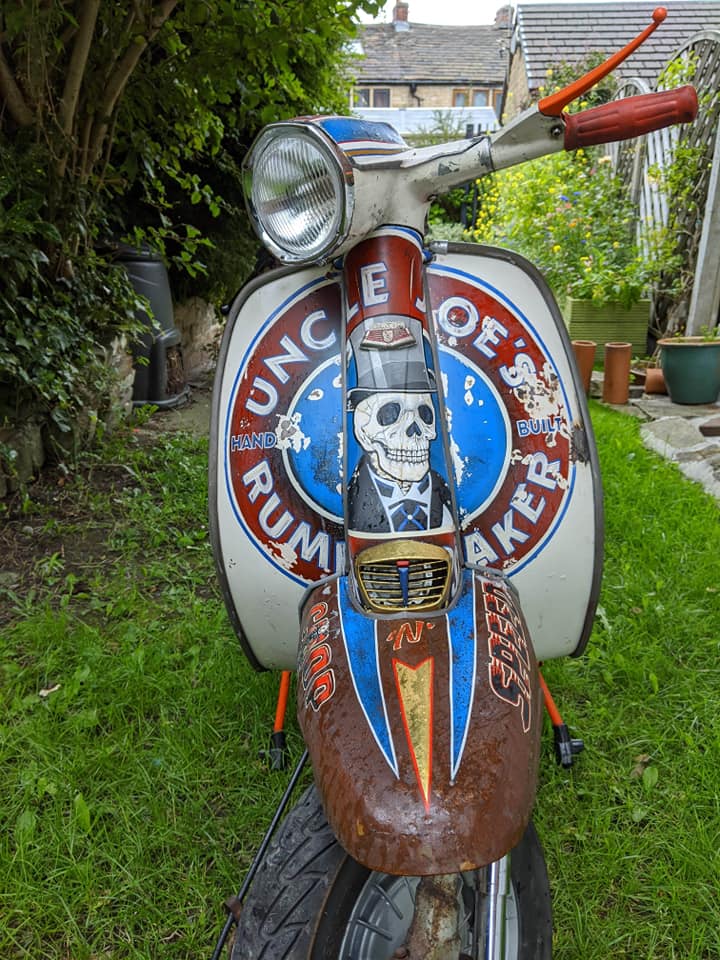 Every now and then, a Lambretta comes along and blows my socks off. This post is about one that has done just that. But first, some context. The ‘rusto-rat’ look has been around for a while, and spawned some great looking scooters. I wrote about it here – back in 2013 – so the look has been around for a while! I think the looks originates with the Hot Rod scene – where distressed and patina-ed bodywork is paired with handwritten signwriting – often coupled with a very powerful engine. The first Lambretta I recall having this look – a real gamechanger – was a Series 2 called Janie Jones, and features heavily that post.

So, this signwritten rusto-rat look has become a staple of the custom Lambretta scene now – and there are many very cool examples of it around. The signwriting lends itself to classic curves of the Lambretta – and the retro typography is and clearly handwritten and crafted style is just matches perfectly with the machine.

Styles changes, and every style evolves. That’s what keeps things fresh. I think the rusto-rat scene has reached it’s apex in this scooter. I love everything about it. The theme is original. The way the graphics and the type fit the panels is spot on – without looking too contrived. And everywhere you look there are little touches that just make you smile. And it all comes together beautifully.

The scooter – a Serveta – has had a complicated history, involving both Kris Green and Harry Barlow (of H-Bomb Scooters fame) in it’s creation – and is now owned by Darren Wood from Wigan. The signwriting and faux-patina work was all carried out by Phil at The Monster Forge – a visit to their facebook page reveals more more of Phil’s fantastic work – on scooters, trucks and more. If this style floats your boat – and it does mine – Phil is the master of it. There’s some fantastic Alice of Wonderland murals on some Series 2 side-panels if you scroll down a bit! I hope to feature a blog post on Monster Forge in the not too distant future – stay tuned for updates.

Liking the look of this ’56 LD150… Untouched for 30 years, and back and running. For sale for £1950 with lots of spares, including a spare engine. I found it while browsing the Volkszone.com Volkswagen forum, so you’ll probaby have to sign up to that if you’re interested, as I haven’t spotted it on eBay yet…

The King Kurt side panels bring back some pleasant memories of a misspent youth, and some fantastically messy gigs too. Ooh wallah wallah wallah, ooh wallah ooh, indeed.

Browsing eBay, as I do, just on the off chance my lottery numbers come up, I came across a couple of rather nice Series 1’s… each with a completely different look and feel. First up is this restored example in turquoise and white… 175 AF Rayspeed kit and a Clubman exhaust… it’s got a fixed “Buy it now” price of £3,150. Very tidy, very nice. If it’s your cup of tea, here’s the link: Lambretta Series One on eBay.

But I think I actually prefer this one… “The Swiss Shitter” Based on a Swiss model* Series One, and also dating from ’59… this ‘rat look racer’ has a lovely patina about her… love the “stickerbomb” look and the chrome horncast. It’s got a Rapido 225 lump, GP 200 Gearbox and the carb and exhaust (a Fresco) to go with it. Currently sitting at £2,250 but with four days to go, and this one will go higher. Here’s the link. 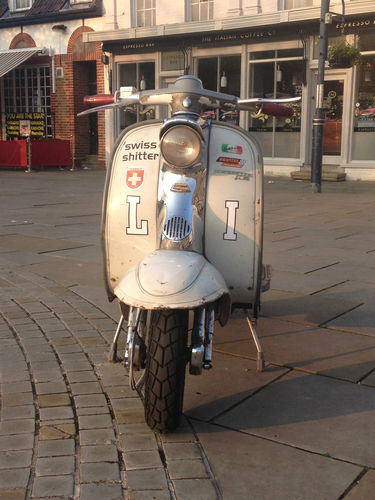 *Swiss model? No, I didn’t know they made one either. I can feel a bit of research and a blog post coming on! From the eBay listing, there was hand pinstriping as standard, as well as side panel and front mudguard embellishers, and running board protectors.